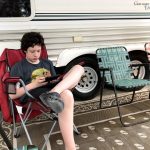 Ugh. I have no idea how to share this without sounding like a school report! Last week, we were all on vacation. We rented a frickin’ RV against our better judgement and drove to Florida to visit my mom, dad & sister.

We decided to drive because we could not IMAGINE taking the little dude on an airplane and anyone surviving. I’m fairly sure after a few minutes of his highest pitched screaming the pilot would have just crashed the plane to put everyone out of their misery. He is THAT LOUD when he’s mad. And lots of things make him mad…dirty diapers (just imagine changing a 40 lb, 5 year old’s diaper on a plane??), being hungry, being tired, being bored, being stressed, not being able to hear his iPad (and he will NOT wear headphones…yet)…OY. It was a nightmare to consider. And, it would have cost a small fortune.

Driving in our Pilot was considered briefly but the little guy eats every 2-3 hours. We’d need to stop for that to happen and Caleb eats C.O.N.S.T.A.N.T.L.Y. He is almost 13 (please pray for our food budget for the next 5 years.) Plus we wanted to take the dog since my parents consider him one of the grandkids. Our max driving time in the Pilot is a 5 hour trip to my parent’s camp, it take 7-8 hours. At that rate, we would have arrived in Florida and had to turn right back around to start for home.

So, the RV made sense. We didn’t need to stop for every meal. There are seat belts at the table and couch so I could move the kids around as needed to ward off boredom (also, we let Caleb sit in front sometimes…it wasn’t strictly legal in every state we passed through but…seriously…he’s bigger than some adults (like my mom & MIL) and they’re allowed…so…yeah. Spoiler alert – he lived) bathroom breaks were MUCH more pleasant since they could happen as needed and NOT in public restrooms or on the side of the road and if anyone needed to get out to get a break from the screaming it wouldn’t involved a 20,000 foot descent into madness. We could just pull over. This let us stretch our driving time significantly.

Why then did it feel so ill advised? Because it was new and if you live with fragile X you know that new is not good. New can often be very, very bad. New can mean anxiety, tantrums & meltdowns. We know that doing something new well means lots and lots of preparation and practicing it in workable segments. It means building up to the entire experience. That was not happening here. We were picking up the RV, packing it and leaving. The kids had 12 whole hours to get used to it before we left and they chose to spend a good chunk of that time sleeping (bless their little hearts because Eric and I had tons to do.)

The little dude has also had a LOT of changes in his life. Sudden and traumatic changes. We had a social story and we shared it with him, we reassured him over and over that we were all going to go back home after but I’m really not sure how much he understood. Worse, I’m not sure how much of that he believed. Looking at his life, from his perspective, you can see how maybe adults aren’t really all that trustworthy. Taking him from the house where we promised we would live for a long, long time could have gone pretty badly. At least this way we could have turned around if necessary. 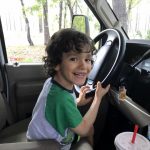 When it was all said and done, it turned out to be the very best choice we could have made. Having the RV provided all the benefits we were expecting, plus it allowed the boys to have a consistent place to sleep or decompress regardless of where we were. On the last day of our return trip, after driving over 3,000 miles in 10 days, we were all done. We were ready to be home, we were ready to be more than 30 feet from each other at all times…but we were also a little sad. It was the best time and being in an RV felt like it opened up the entire country to our family. We could go anywhere.

As we drove back to the dealer to drop off the RV, Caleb told me that Daddy needed to run into Target and buy an RV…his alternate was to order one from Amazon. I haven’t checked Amazon yet but I wouldn’t be surprised if he was right…I wonder if they’re Prime eligible…