This past weekend was easily the nicest weather we’ve had since last summer and we took full advantage of it!  We really needed all that sun to dry up the 12 inches rain that fell in March.  I thought we might start growing gills if it hadn’t let up!

Saturday was supposed to be a “lay around and be lazy all day long” sort of day but Monkey had other ideas.  Almost from the moment I woke up he began asking to go for a ride on the “blue train.”  Normally if he asks to go someplace he will quickly change his mind once I agree but I didn’t want to risk it this time so instead I gave him lots of reasons why we couldn’t ride on the train.  And he kept eliminating those reasons while continuing to pester me, lol.  He showered, he got dressed, he ate lunch, he put on his Crocs and grabbed my sandals even.  D.E.T.E.R.M.I.N.E.D.

Duhdee thought this was hilarious and blamed my family for the behavior.  He is kinda right on this.  I think my mom would agree that there is one particular member of my family who, once he gets an idea in his head, is relentless in pursuit of it. *cough*Dad*cough*  This is one reason Duhdee rarely tells me no when I want something, he’d rather not listen to months of reasons why we should do exactly what I want.  He just skips to the inevitable.  So, you can see why he thought this was so funny 🙂

We had a few errands to run and I hoped that I would be able to convince Monkey he would enjoy our plans just as much.  You probably won’t be surprised to learn that after our first errand of the day (dropping books at the library) we found ourselves being dropped off at the nearest T station while Duhdee did the rest of the errands by himself.

The subway system in Boston has 4 lines, the Red Line, the Green Line, the Blue Line and the Orange Line.  We rode ALL FOUR.  It didn’t take as long as it might seem, we were able to do a loop in about 2 hours.  We then caught a bus (another favorite of Monkey’s) home.   He loved every minute of the trip.  He was saying “Hello, how you doin’?” to everyone, lol.  He sat in his seat with a huge grin on his face and kept telling me what train he wanted next.  Fortunately, his plans matched up perfectly with the route I wanted to take. 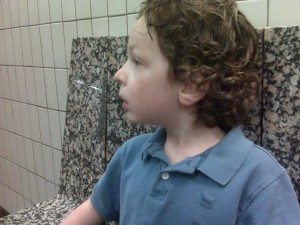 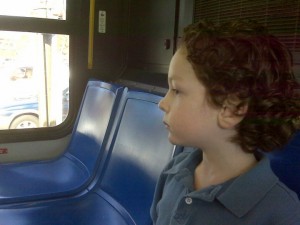 After our ride we played in the yard which, I have to say, I had promised him 4 hours earlier for AFTER we ran our errands.  Punk, didn’t run any errands and got to play in the yard.  Who told him I’m an easy mark? 😉 We all went to the local farm store where we visited with the llama (with severe dental issues, you just have to enlarge that photo, lol) and the chickens, including peeps!  Very exciting for both Monkey and I.  After dinner we walked the dogs.  Unsurprisingly, Monkey was out like a light shortly after we got home. 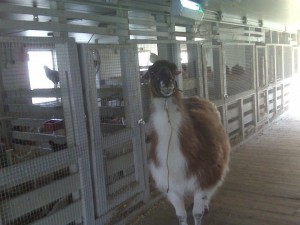 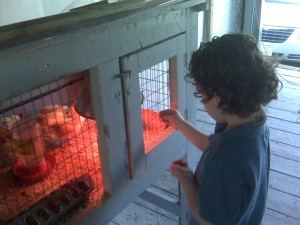 Sunday morning, around 5:15, we were woken up by a little Monkey standing by our bed with an egg.  “Look!  Egg!  Awwww!” as he hugged it to his cheek.  Duhdee managed to get him to go back to bed but 30 minutes later he was back again and we knew we were beaten.  Monkey was thrilled that the “bunneh” had been to our house and hugged every single egg.  When we asked him what was in the egg, thinking he’d open the egg to see, he told us “baybee pen-guin!”  He wasn’t too disappointed to find that it was “only” candy and no baby penguins, lol.

Sunday afternoon, Great Grampy came up for a roast.  Monkey was a little anxious about Grampy being in our house but the second Grampy left to go back downstairs Monkey was hot on his heels, lol.  He and Duhdee hung out downstairs just long enough for me to clean up all the left-overs and dishes…hmmmm…that sounds a bit suspicious now that I think about it!  Bums.

Sunday night was another walk with the dogs but this one was interrupted by a nasty encounter with an off-leash lab.  Copper took the worst of it but he seems to be mostly OK, a little sore.  Monkey was terrified.  I think we’re going to have to find a different walking route, I don’t see how we’ll ever be able to convince him to walk past that house again.  Bugger, it’s the nicest way to get to the pond :-\

I think that’s it…well, except for the cleaning but no one wants to think about that part now, lol.  I’ll upload more pictures once I convince Monkey to share “his” laptop with me.  *Ahem.*