Every morning before school Eric and Caleb do their morning shower routine. Caleb likes to wait until the last possible second before he will actually get into the shower. He will lay on the floor or pretend to use the toilet usually, and….the speed at which he gets undressed…I have no idea how Eric tolerates it. When I do his shower, it’s all “Quick feet, dude. Hurry up! Get in!” None of which is great with his anxiety, I know. So there you have the reason I don’t do the shower routine often.

Caleb will also find excuses to leave the bathroom. This morning there was an empty shampoo bottle that had to be recycled right that second. Caleb grabbed it and walked to the recycle bin and back, I stopped paying attention when I realized he had his pajama pants around his thighs…he had gotten distracted mid-way through the undressing process. Totally normal around here.

Showers were finished, breakfast was eaten, school and work clothes were on and I sent Caleb to put on his shoes and socks. He cheerfully agreed and took off in search of his shoes but forgot his socks. Also totally normal around here. I went in his room and grabbed a pair of socks. As I left his room, something on his dresser caught my eye… 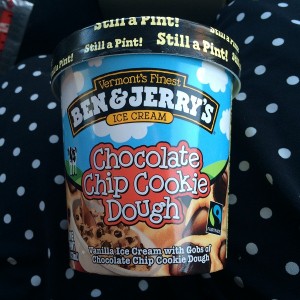 I picked it up (to make sure it was empty) and showed it to Eric without comment because this too is totally normal around here. This child, who actually doesn’t really like ice cream, is obsessed with these Ben & Jerry’s pints. Let me rephrase that….this child is obsessed with this: 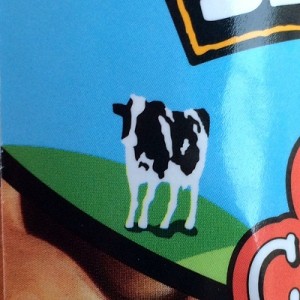 I don’t know why but he loves that cow! We wash the cartons out thoroughly before we toss them in the recycling bin because we know that no matter what, if he sees one, he is going to insist on carrying it around while he hugs and kisses the cow and calls it “awww, baby.” *kiss*kiss* It makes me smile.

As we were putting coats on, I noticed he was holding the carton. He always grabs his stuff before he leaves the house…the stuff varies day by day. Sometimes it’s a notebook with a highlighter tucked in the spiral binding, sometimes it’s his phone and a set of keys, sometimes it’s garbage. This morning it was garbage. Fine and dandy.

We have a strict no garbage in the school rule so, when we arrived at school, I opened his door and immediately told him to put the carton down. “It will be in the truck this afternoon, bud, let’s go.”

“Caleb, you are not ever going to fool me with that.  I will always catch you.” I mean, really, he was going to have to walk right past me to get to the sidewalk. His Money isn’t a fool.

He continued his slow slide out of the truck and kept his arm behind him. Finally, I leaned in to take the carton so he could get on with the morning at something approaching a normal speed. When I looked behind his back though…I laughed. Loudly.

Captain Sneakypants was holding that empty ice cream carton behind his back but during that slooooooowwwww slide he had also put it under his coat! Duuuuuuude! I was very proud of him.

And, yes, I still took the carton away from him. As we crossed the playground, I finally stopped laughing and turned to him, “I will always catch you when you hide things behind your back. You should try slipping stuff into your backpack on the way over.”

Eric couldn’t believe I was giving him tips on how to sneak things past us…but hey…I love to see developmental progress and this was so, so, so very typical. OK, maybe his Money is a bit of a fool!