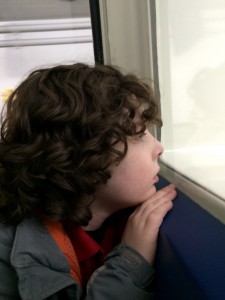 At the last leadership series session, one of the presenters began the day by walking us through a bit of meditation to get us in the right frame of mind for a day of hard work (through play, it was awesome.) I’m going to shorten this by a great deal but you’ll get the idea.

She asked us to imagine a child being born, it could be any child and any setting. Imagine that this child is born covered in glitter. Then think about all of the people that child comes into contact with throughout their lives…all the people who were present when the baby was born, family, friends, people in the supermarket, doctors, nurses, teachers, friends, colleagues, people walking down the street, people in restaurants, people in the assisted living facility they live in when they’re very, very old…every person they sit next to, walk past or interact with. That’s a lot of people, enough to fill a stadium, at least, right? Now imagine that this glitter covered child touched each and every one of those people and shared their glitter. You know what happens when you get glitter on you, right? It’s impossible to get off! Days later you will still find it on the floor or in your hair.

I don’t know about you, but I pictured my son’s birth and he was covered…head to toe…in pink glitter. Glitter that was made to be shared…glitter that makes the world more beautiful and a happier place just by existing. I began crying before the exercise was even half over because I knew where this was going. I began thinking of all of the times we had stayed home instead of going, all of the times I had held him close instead of letting him explore, all of the times I had pulled him away instead of acting as his voice, his translator, when he approached someone. I began thinking of all of the times I had prevented him from sharing his glitter and I felt such pain. And when I thought about why I had done this it came down to…it was easier, it was more polite, it was less embarrassing…none of which are acceptable. I was so stuck in the moments that I was missing the big picture.

This was eating at me for the rest of the day. It was another entire day before I was able to share it with Eric and when I finished, I told him. “So, I’m going to stop. We are spreading that glitter everywhere from now on.” Throughout the week we spent in DC, anytime I thought to call him back…I stopped myself. I stepped in to help when others didn’t understand him (“He just wants to shake your hand.” “Oh, I thought he wanted my cigarette!” Duh.) I resisted the urge to keep him by my side, though I did still have to do a bit of herding to keep him from taking off in the elevators by himself. I encouraged him to interact with strangers (“Give him a fist bump when he comes back.”)

It was, in short, amazing. I saw things in Caleb that I had missed before. I saw the smiles he brought to people’s faces…even when they didn’t do anything more than look at him.

Sweetheart, I feel badly about all of the times I stopped you but it won’t happen again. Spread that glitter, dude!