Last year he refused outright to pick out any birthday party gear. If you want to look ridiculous, and really, who doesn’t, you should try chasing your five year old around a party store demanding that they pick a theme right. now. THEN threaten them with, “We are not leaving until you pick birthday plates, dammit!” OK, I didn’t really…well, I did *blush* but I did NOT say “dammit!” ((The answer to that question that just flitted through your brain is “Lots.” There is LOTS wrong with me.))

I thought that this year I might get us back on track by slowly breaking him down introducing the subject to him. Since his birthday is in May I thought January would be soon enough but I think he just made it clear that I should have started in January 2009, which was the last time we discussed it and he didn’t immediately shoot down the very idea of a party.

I just very casually showed him some plates I thought he might enjoy (here, here and here) and a set I want (here) and he immediately responded with “No, stay here?” and ran out of the room. I haven’t even mentioned the “P” word yet! This should be fun.

Come ON! Who says no to plates like this??? 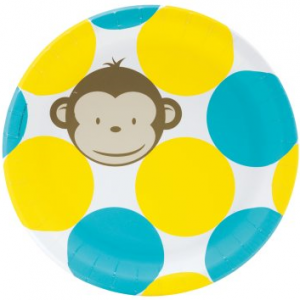 One thought on “He is *really* anti-birthday.”