Today is Maine Maple Syrup Sunday.  Lots of “sugar shacks” open their doors today and welcome people in to see the process and hopefully buy some syrup.  We went a few times when I was growing up and I’d always wanted to take Monkey as well.  The event has actually gotten to be so big that many of the larger places are open for the entire weekend and not just on Sunday…so we went yesterday along with Grammy, Grampa, Auntie, Linda and Don.

Our intention had been to get up very, very early and be at the farm in time for a pancake breakfast around 9.  Unfortunately, I was only able to get up very early and so we had to eat a little something before we got there.  Monkey never would have made it on an empty stomach.  It was still a reasonable breakfast time when we arrived at Harris Farm but the line for pancakes was ginormous!  We thought we’d wait a few minutes to see if the line would shrink. 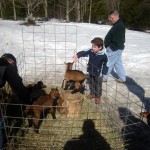 While we were waiting for the pancake line to disappear we headed toward the sugar shack.  We didn’t quite make it though.  You see, they had goats.  BABY goats and Umma cannot possibly pass by a BABY goat without stopping for a little love.  While we were petting the goats the HORSES arrived pulling a sleigh full of people.  Monkey cannot possibly pass by a sleigh ride without getting on so we took our second detour. 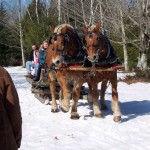 Monkey was very excited about the sleigh ride.  He kept telling us to “gooo!” but we had to wait for the sleigh to fill up and the HORSES to cool down.  Once we were underway he was just thrilled with the ride.  He was all grins and giggles as the horses pulled us through the woods and the fields behind the sugar shack.  As we were nearing the end of the ride we passed an elderly couple who were exploring a bit, he waved and said “Hi!” 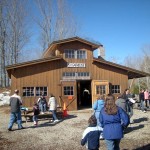 When we stepped off the sleigh we were informed that there were fresh, homemade donuts in the sugar shack.  No number of baby goats or horses would deter us now!  The donuts were still warm and were rolled in maple sugar.  Oh, my.  Even better than Krispy Kreme and I am not one to say that lightly.  After eating 2 each we no longer cared that the line for pancakes was still 10 miles long.

We then finally toured the sugar shack!  A very nice young man (age 10 or 11, I would say) explained the process and answered our questions.  He told us it takes 1 hour and between 20 and 50 gallons of sap to make ONE gallon of maple syrup depending on the sweetness of the sap.   Holy moly, no wonder its so expensive.  This particular farm used a combination of special sap collecting bags and traditional buckets, no sign of rubber tubing here!  After buying some syrup we headed across the street to the rest of the farm. 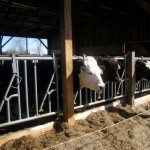 We spent some time mingling with the beef cattle.  We tried for quite some time to get a picture of their tongues…they were very rough and quite comical but despite getting soggy cuffs and losing a layer of skin on my hands we were unsuccessful.  Pity.  This guy on the left was my favorite, I am a sucker for curls and he had the best curls.  We peeked in at the dairy cattle but we weren’t allowed in the barn.  Our final stop at the farm was in the store where they sell their own beef, milk, butter, etc.

We took one last look at the line for pancakes, consulted our still full stomachs and decided we’d hit the road and look for lunch instead.  I can’t imagine what a zoo the place was today! 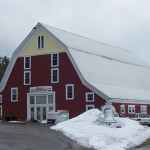 Grampa knew of another sugar shack nearby that he wanted to check out as well so we jumped in the cars and were on our way.  The second farm was also an Agway.  I had to go inside and poke around, nothing makes me happier than a farm store.  They had the cutest chicken coop but Grampa was appalled by the price.  It was big enough for 10-15 hens so it seemed reasonable to me!  I went into the store and looked up and down the aisles but was ultimately disappointed.  I had been HOPING they’d have peeps but no such luck.  Oh well.  My trip around the store was put to an end because Monkey decided he was DONE.  Alrighty then.  Back outside where we bumped into Grampa again as he came to tell us there were pancakes here too!  But we were all so stuffed full of donuts we ended up passing them by, lol.

When Duhdee and I walked up the hill to the sugar shack though we discovered something so cool.  They had PONY rides.  We’ve been contemplating this for some time.  I really wanted Monkey to try but it was either the wrong place (too busy, ponies looked exhausted and/or deformed) or the wrong time (Monkey was hyper-aroused.)  We stood and talked to the folks for a while and Monkey pet one of the ponies.  He seemed really interested in them and not at all afraid.  One of the ponies kept trying to stick her nose in Duhdee’s pocket.  We were informed that she was looking for pancakes.  Apparently someone had slipped her some earlier and she liked them, lol.  When one of the other workers brought over a plate of pancakes for the handlers this pony was hilarious.  She was being very pushy and grabby and trying very hard to get a bite.  The woman held the plate up over her head and the pony stood on her hind legs to try to get them, lol. 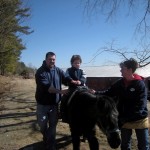 After they finished their pancakes we asked Monkey if he wanted a ride and he smiled.  When we put him up on the pony he lit up.  He was in love.  Duhdee paced along beside him but he quickly learned to use his legs to steady himself.  We were so impressed with how brave he was to try it and how well he did.

After all this excitement we were off to find lunch and then head back to Grammy & Grampa’s house for some relaxation.  I am so glad we remembered to go and I can’t wait to get Monkey back up on a horse!