We visited with the developmental pediatrician this morning.  I spent last night poring over the daily reports we get from the teacher.  I had been a little worried that maybe we were only seeing a change because we expected to, you know?  I always second guess myself 🙂

Our daily reports are a chart, Monkey is rated on a scale of 1-4 on his participation and his regulation for each part of the day.  Participation captures things like how focused he was and how on topic his words and actions were.  Regulation captures his flapping or other stimming and his emotional stability. 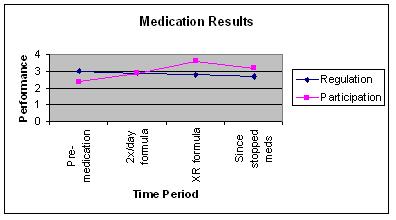 OMG, living with a geek has rubbed off!

I did not realize how much he had improved, even on the XR formula.  I think his teacher would be surprised too.   I also expected his regulation to drop off more sharply than it did.  I’m thinking that his negative behaviors (whining, jumpiness, racing around) were so much more noticeable that we focused on them more and didn’t recognize that he was making progress still.

So.  The last time we doubled the dose and switched to XR, we’ve decided to keep the higher dose but try the 2x/day formula again to see if we see less of the side effects.  The Dr. told us that he has seen another boy that reacted to the XR formula just this way.  His theory is that some kids need that sudden jolt of medication to calm their bodies down, that the slower time release just doesn’t have enough kick.

We’ll gather more data and go back in another month to discuss the results.  If we’re still seeing the side effects on the 2x/day formula we’ll probably switch to Focalin.  My insurance company doesn’t like to pay for Focalin because it’s so much more expensive but I think we’ll have a good case for it if we try this and it doesn’t work.  *Fingers Crossed*

Also, (yeah, there’s more) the teacher’s notes on his daily chart noted a “significant decrease” in eye contact when the XR release started and an increase in off-topic language.  In looking at them I noticed an increase in the number of comments that he was emotional or distracted and a change in how she described them.  We went from “a little” emotional or distracted to “very.”

One thought on “We are an anomaly, but we are not crazy.”