Monkey’s speech is…uneven. He has a lot of really clear words that he uses in very typical ways. He also has really clear words, and more than a few less than clear ones too, that he uses in very scripted ways. He quotes The Penguins of Madagascar (Oh, dear!) most often.  Then there are the muddled words that he is clearly using in some sort of script but gooooood luck figuring out what the H-E-doublehockeysticks he is talking about. This is where the fun starts.

We’ve played the “What is he saying?” game here before…now with the scripted speech we’re discovering a new game. The “What episode is that from?” game. It has turned out to be quite a lot more difficult than I expected. There are only so many episodes of the Penguins! This should narrow the field down considerably but then you add in the fact that sometimes Monkey mispronounces words or swaps out a challenging one for an easier one which significantly lowers the odds of you finding the right episode.

Clearly he’s quoting The Private, the “Oh, dear” and slightly British accent gives him away every time. But there are no episodes with a tiger 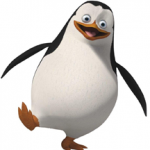 that I could find! I found FanFiction with a tiger but nothing official. Just as I was beginning to think that maybe he was changing up the game by combining quotes from YouTube clips he showed his hand. He called me from the other room, “Mommy, LOOK! A tiger! Oh, dear.”

Dude, that’s a BADGER! And that makes total sense because, as everyone knows, The Private is scared of badgers, duh! So, Monkey is learning a new word this week while I’m home. Not that “Look! A badger!” is going to make anymore sense to people but at least I’ll know he’s sticking to the script.

In his defense, as if a Monkey as cute as he is needs a defense, the badgers do look a little…cat-like, perhaps even a little bit tiger-ish, no?

2 thoughts on “Would it be boring if we didn’t have these games to play?”