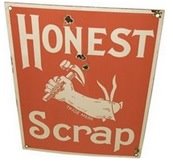 Vicki at Holly Daze presented me with this award.  THANKS!

The rules for this award are as follows…

Choose a minimum of 7 blogs that you find brilliant in content or design.

Show the 7 winners’ names and links on your blog, and leave a comment informing them that they were prized with “Honest Scrap”.

One thought on “The Honest Scrap Award”