So. We just did our morning drop off.

The plan was that we’d do our normal drop off and his teacher would observe from a distance so that we could figure out the best place to transition Monkey. We wanted a location a that he was relatively comfortable in (so, not a doorway) and one that would not subject him to staring if he had a hard time. He is hyper-aware of being watched so I had little hope that his teacher was going to be able to find a location to observe from unobtrusively.

When we arrived at school I convinced Monkey to run with me a little to enjoy the “windy” day. Monkey loves wind in his hair! I looked around and did not see his teacher, I was thinking, “Wow, she did a great job of hiding!” I even thought that maybe she was observing from the second floor balcony. That all came to a crashing halt though when we walked around the final corner to his classroom and his teacher was just leaving the room. What the #3!!?

You could tell by the look on her face that she knew she’d flubbed up. She moved quickly out of his way so she wasn’t between him and the door. What she didn’t realize though was she’d just made the most brilliant move ever. One that could not have been planned. She moved into the space where Monkey normally gets “stuck”. With his teacher there, there was nothing left for Monkey to do but step on into the classroom.

Duhdee hung up his backpack and we kissed him goodbye just inside the doorway just like all the other parents. Now if we can just figure out how to choreograph this so she is stepping out of the door and into The Waiting Place every morning… 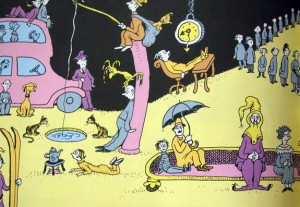