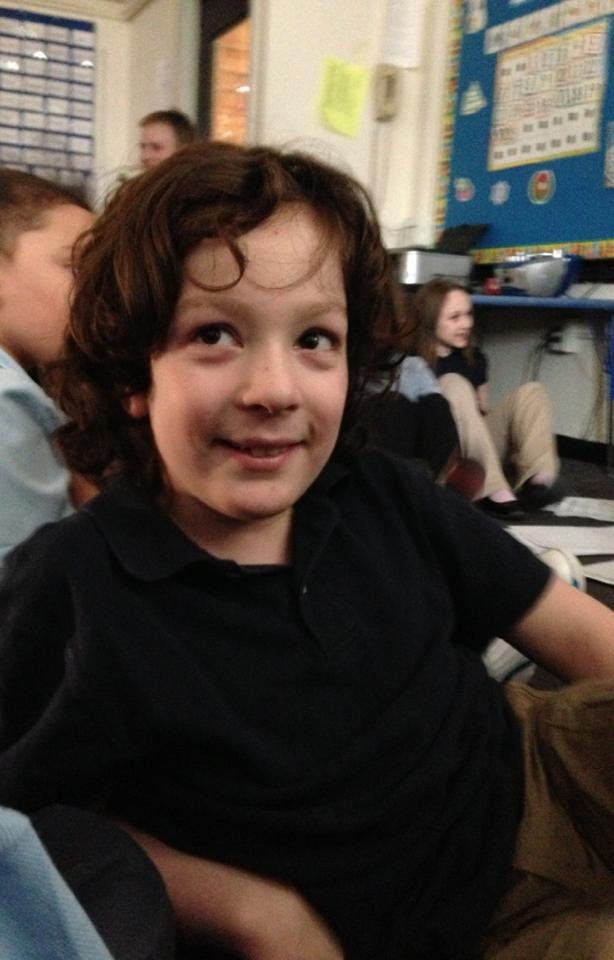 I often struggle with pessimism. I know, I know…I’m the ultimate silver lining in a bad situation kind of girl but I try so hard to not let myself hope for too much. I prepare for and expect the worst which is what makes it easy for me to find that silver lining when bad things happen. Hoping and wanting good things is torture to me, the anxiety it generates is paralyzing.

This is why when we began the STX209 trial, Eric and I agreed from the outset that Caleb was on the placebo. My heart nearly broke each day as I watched him so closely, despite that agreement, for any sign of improvement. What if he is on the full dose and it didn’t help him? That to me would be the worst possible outcome. That would have killed the hope I have had in my heart since the diagnosis that we would find something to fix this, to make this better, to make him happier and more successful.

During the trial we saw glimmers of improvement, increased eye contact, decreased anxiety, but I refused to let myself believe it. It wasn’t until Caleb’s last IEP meeting, when we heard his teachers and specialists confirming that they saw the same at school, that I actually allowed myself to believe he was on something. I still hoped fervently that it wasn’t a full dose because I want to keep that hope, that the glimmers would become so obvious that we couldn’t deny their existence, alive.

Then we titrated down off the trial. It became clear immediately that Caleb had been on something. His anxiety shot through the roof, his emotions fluctuated wildly, we were left with a child who was just flailing in every aspect of his life. He was out of control which, fortunately enough for us, meant tears and whining (ZOMFG THE WHINING) but no aggression.

We could not wait to start the open label trial, the wondering part of the initial trial was over. We knew he was getting the medication and we knew how much. It wasn’t a very happy process for us to start. Caleb still seemed to be struggling emotionally and we didn’t see any improvements. We noticed that for 24 hours after we increased his dosage his emotions fluctuated wildly, his appetite would disappear and he was incredibly sleepy. He even fell asleep at school a few times. And still we saw nothing.

That fear that he wouldn’t respond to the medication resurfaced. I began to have doubts that he had really improved during the trial. I began to think we had fallen victim to the placebo effect and imagined it all. I began to think maybe we needed to stop the whole process, he had been so happy before we had taken him off the Celexa in the fall and now we were just playing with his moods. It reignited all of those painful thoughts I had struggled with before agreeing to the trial in the first place…thoughts of experimenting on my own child. Thoughts that I hadn’t truly loved him just as he was, that I was doing all of this for my own selfish benefit because I still couldn’t accept that I had a child with fragile X…that this was our life for now and forever.

Then I noticed a small something, it was the same small something that had let me know that the Celexa had been working oh so long ago…Caleb’s eye contact returned. He would engage us in play and, no matter how excited we all got, he maintained a consistent level of eye contact. When we ate dinner he would look straight at me when I spoke. Though my worries began to ease, I still wasn’t confident enough to voice that.

Last week, finally, I whispered to Eric as we were all playing on the big bed, “He’s looking at us.” and Eric agreed that he’d seen it too. I crushed that ridiculous little flutter of hope with the weight of my continued worries over his emotional struggles around medication increases, his loss of weight due to his appetite suppression and his exhaustion at the end of each day.

I find though that I can no longer deny that this medication is working. Too much has changed too quickly, too obviously, for me to continue.

He is more independent in our routines, I can ask him to do something and it no longer matters how many steps are involved…he will do it with virtually no prompting. The only prompting I find myself doing involves him getting distracted by what he’s watching on TV…it’s so very typical for his age that I can’t even really consider it prompting in the same sense. If I pause the movie or TV show he will quickly finish what was asked of him.

He takes initiative, I don’t have to ask him to do certain things anymore. If I tell him it’s bedtime I don’t have to ask him to put on his pajamas, find Grabbit and get into bed…he will do all of that…again with the minor distractions that you expect from an 8 year old who isn’t quite convinced I meant that it was bedtime right that very minute, he might grab a toy or a book but he’ll lay it aside and continue if I remind him that it’s bedtime.

He is doing chores, willingly and without being asked…he has helped fold laundry, he loads and unloads the dishwasher, he will run around the house and pick up dirty dishes and put them in the sink. When we go grocery shopping he will grab a basket and carry it until his arm nearly falls off. We tell him what we need and he will grab it and put it in his basket. If we forget and grab it, he will chose his own and ignore whatever we picked up.

His social skills are improved, during the storm we were outside with a big portion of our neighborhood cleaning up and he greeted everyone, some with handshakes and others with a, “Hey ‘sup?” Many of those who were out there are virtual strangers to him but he never hid his face, he wandered freely amongst the houses while keeping an eye on Eric and I. At the grocery store the clerk remarked, “He must keep you laughing all the time.” based on Caleb’s greeting and obvious understanding of the entire process and his eagerness to help us all.

His verbal skills are improved. He has more words…sentences…paragraphs…he tells us about things that happened, not just things AS they happen. He repeats everything, we have taken to calling him “The Echo” which always earns us a quiet “echo” from him.

He’s planning. He found a Christmas catalog somewhere, found a Nerf gun that he wanted and asked for it. He knew where to get it “ToyRUS?”, he would tell us what color it was to differentiate it from the others on the page. When Eric took him to ToysRUS to buy it, he wandered up and down the 4 different Nerf aisles until he found the exact gun that was in the catalog. While Eric scanned box by box looking for it he took a glance and immediately knew those were not it, some were close but not it…and he kept looking. Oh, and, when he saw the catalog…he read “Nerf” and pointed it out to us.

I could go on and on but what I’m saying here is that (except for those 24 hours after a dosage increase) he is calm, focused and independent. His air of capability is remarkable, he has no doubt about what to do or how to do it…I watch him in awe these days. I’m not sure I can convey what it is like to see a child go from a toddler to a kid almost literally overnight. He is changing so quickly, so drastically, that the biggest risk here is that we will continue to baby him too much when he’s really OK on his own. Other than other FX parents who are on this trial, I’m not sure anyone will ever experience watching your child seemingly mature years in just weeks.

And it’s not just us…Caleb’s teacher reports that he is increasingly independent at school as well. She can send him to the office alone, she waits for him at the top of the stair still but she doesn’t need to. When we drop him off at school he walks through the classroom door easily, often with no prompting…after years of tears over this task…it’s magical. And when he’s ready to head out with his friends to start his day he’s right at the front leading the charge to the next class.

Oh, and…he’s at less than half the ultimate dosage still. I’m not sure I can even hope for too much at this point, he’s changing faster than I can dream new dreams.

68 thoughts on “Hoping for too much?”