It’s so unfair!  I need more weekend and less week!

On Saturday we went to visit with Grammy & Grampy in New Hampshire.  Since we were headed north Umma decided to toss in a little side trip so we could pick up a play kitchen for Monkey.  We’d been tossing the idea around for some time.  At school the kitchen area is at the top of his list for choices and when we visited the library recently he ran straight for the little playkitchen they had set up.  We finally found one on craigslist that was a decent price, in great shape and somewhat near the city. 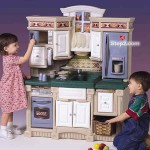 Monkey absolutely loves it.  When we got to Grammy & Grampy’s we had to take it out of the truck to get to some other stuff in there so we set it in the entry for him to explore.  He inspected all the doors and drawers, checked out the foods and even had us move it away from the wall so he could see behind it, lol.

We were able to get him to leave it though.  He is obsessed with having Duhdee “eat” his arms, legs, belly, etc.  He just shrieks with laughter as Duhdee pretends to chew on his appendages…weirdo.  He is very insistant about playing the game and Duhdee has started to use it to get Monkey to do things he wouldn’t normally do.

Monkey: “Eat arm!”
Duhdee: “You want me to eat your arm?”
Monkey: “Yeah, yes! Please!”
Dudhee: “OK, are you ready for your mission?”
Monkey:  Looks around the room for likely targets, “Yeah, yes!”
Duhdee: “OK, go give Grammy a kiss.”
Monkey: Runs to Grammy, gives her a kiss then runs straight to Duhdee for his reward.

Monkey can do this for hours.  He will give everyone kisses, high fives, hugs, etc.  It’s an awesome game until Duhdee is worn out, lol.

On Sunday we just puttered around the house.  Duhdee slept in while Umma and Monkey played with the kitchen and with the train set.  We also attempted to make coffee cake muffin tops but that was a horrid failure, lol.  When Duhdee got up Umma took a quick nap while he and Monkey ate and made coffee.  Then we proceeded to do absolutely nothing!  *Bliss*  Next weekend will be a busy one so we had to take advantage of the opportunity.

4 thoughts on “Another weekend disappears in a flash.”