Monkey is understandably obsessed with our basement these days.  We spend a lot of time down there as we clean up, reorganize and prepare to build an office for Duhdee’s newest business.

The clean up portion was a ton of fun for Monkey because we had to pull out all of his old toys which he really loved.  He would play with his baby toys and you could see that he clearly remembered all of these old friends.  We found a lovely young family via craigslist and we gave them ALL of Monkey’s outgrown toys and baby gear, they were very excited.

The reorganization portion is still on-going and Monkey is even more thrilled.  First, Duhdee built me a seed starting area, I have room for 4 seed tray flats now which is MORE than enough to satisfy me, lol.   He has hung 4 flourescent lights (two over each shelf) and yesterday started the process of wiring them to an automated switch.  He’ll program the lights to turn on and off automatically.  Woot!

All of this building and wiring has meant that Duhdee has been using power tools.  Nothing makes Monkey happier than power tools.  We bought him a set for Christmas and they are very cool but his drill isn’t quite as cool as Duhdee’s drill.  Initally, we kept him from using Duhdee’s drill but eventually we realized that he could use it safely as long as there was no bit in it.   Monkey was thrilled with this development and happily spent many hours pretending to drill holes in the walls, in my seed stand and in the floor.

He’s been keeping a close eye on Duhdee though and he noticed that when Duhdee used his drill he added a “bit.”  It wasn’t long before Monkey was scouring the basement looking for “bits” (this is the cutest thing he says right now besides “honey,” of course.)  He’s very creative and found several potential “bits” and asked me to help him with them.  After putting him off for the entire afternoon he brought over an actual bit that we decided he could safely use.  It was a short, blunt bit that could be used for sockets.  Duhdee installed the bit and Monkey was again thrilled.

A short time later, Monkey approached me with a bolt.  He was trying to get the bit into the bolt.  I took it from him and showed him that it didn’t fit and Monkey wandered off again.   I showed the bolt to Duhdee before I put it away because I was amazed that, out of all the choices, Monkey had picked a bolt with the right shape!  A minute later Monkey approached me again, this time with a socket.  And again it wasn’t just any socket but one out of hundreds that very nearly fit his bit.  Duhdee was so impressed that he stopped what he was doing and found the proper bit and socket combination for Monkey to play with.

I am so impressed by his ability to match odd shapes and to judge sizes so accurately, we’re talking a 1/16th of an inch (or mayb 1/32th of an inch) off on the socket and he had literally hundreds to chose from.  It wasn’t even the most convenient socket to reach, he had to reach over several rows to get the one he picked.  He just blows my mind sometimes.

Besides the wiring we’ve started painting the basement with a paint designed to seal out moisture.  Duhdee picked one that is water based so Monkey was able to help us paint.  He seemed to enjoy it at first but ultimately decided that using power tools is more fun.  I think if Duhdee had given him the roller he might have stuck with painting longer.  Though anything that we do down there paint-wise will be an improvement, we weren’t quite brave enough to hand over a full loaded paint roller.  We still have miles of basement left (we’re painting each area as we finish cleaning it up and just before Duhdee re-wires it) so maybe he’ll get his hands on a roller before we finish. 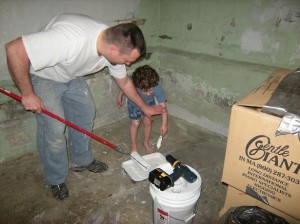 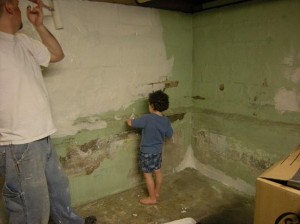