Sometimes I worry that people will think that we are overly permissive with Monkey because of his disability1.  We run a very child-centered household for sure and we do it because we are trying to foster a sense of power in Monkey.

It seems to me that it would be very easy to feel powerless if I were in Monkey’s position.  If I were unable to clearly communicate my thoughts and desires in many situtuations, what are the chances that even well-meaning people would discount them?  How many times do you suppose that he tries to communicate something and has it misinterpreted?  I know for sure that it has happened at school and it happens at home too.  There are times when, no matter how well we know him, we cannot understand what he wants.  We’ve given up, at times, out of frustration because we can’t figure out what he’s trying to tell us or ask of us.  Those situations, few and far between as they are, break my heart.

So home is the place where we feel we can best empower him.  Sometimes it leads us to do things we do not want to do.  For instance, Monkey will grab a stick of shortening and point at the mixer to indicate he wants to cook something.  It’s now up to me, even when it’s the last thing I want do, to figure out what we can cook with shortening and a mixer (the answer is Snickerdoodles, btw.)  Saturday evening he decided he wanted to use the food processor.  We don’t often use the food processor so it took a little while to figure out what we could use it for (homemade hot chocolate)  and we did so even though it was dinner time and we should have been cooking dinner instead.  It seems like such a small thing, to stop whatever plans we were making to do what he requests but I hope it pays off in the long run.

Even if it means we need to order out for food if we want to eat dinner anytime soon. 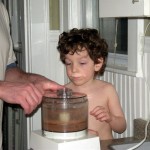