Remember this post, Habit forming, from last month where I was kicking myself for giving in to Monkey and letting him buy Doritos from the vending machine at work? I have an update.

As expected, he whined and moaned and even cried over my refusal to let him buy ‘Ritos every day. “Wanna come?” became the standard greeting for me each night.

ANYWAY.  Every night it became “Wanna come? ‘Ritos? 4 of ’em ((The number of quarters he needs to buy a bag, he is a very smart little punk!))? Want some please. Hongry, Money, hongry?” If we ignored it, tears. If we said no, tears. If we said when we get home you can have a snack, tears. It was such a pleasant way to end a day at work!

He always has Cheerios in the car but they have, after 8 years or so, lost their appeal for him so he never accepts that as a compromise. There are other snack foods, that don’t come out of vending machines, that he will accept though.

So I hatched a plan. I began saving the Trader Joe’s Baked Cheese Crunchies ((TJ version of Cheetos, we love them!)) that Eric was packing in my lunches ((Awww! I know.)). When I got in the truck, and he started his long list of questions and complaints, I would hand him the “cheetahs” and just tell him “I don’t have any Doritos.” That was it, nothing else.

And he totally went with it! It’s worked so well that Eric has been packing an extra little bag of something he’ll like in with my lunch so that I can eat mine and still have a snack for him ((Like I said, Awww!))!

We still have a minute or so, between when Eric stops the truck and I get in, where he’s primed for those Doritos but slowly, oh so slowly, we’re winning this one. At the very least, the tears have stopped which is really 100 times better. I totally prefer smiley, laughing Monkey to tearful, hongry Monkey!

Current hot snack item? Goldfish! The main reason for the Goldfish is, I’m much less likely to steal these during the day. Oops! 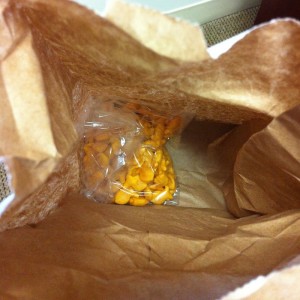