This past Saturday we celebrated Monkey’s 5th birthday!  His birthday isn’t until Friday but this was the weekend that worked for the most people so we decided to celebrate early.  He totally makes out because he gets presents from us twice, lol.  We’re saving the big one for Friday…hopefully Duhdee finishes the preparations.

Last week was a blur.  We had to pick up a lot of odds and ends for the party, we had to pick up some gifts, we had to order a cake.  3 out of 4 years we went to the grocery store bakery and had them put a cake together, last year we made one at home…this year Duhdee decided he wanted a really cool cake.  We’ve decided that if we’re only going to experience this (raising a child) once then we’re going to make sure we all enjoy ourselves.  The cake was a custom order from a nifty bakery in Belmont called Yum Bunnies.  It was perfect.  Duhdee told them we wanted a cake with tools, both power tools and hand tools were fine, with accents of yellow and red. 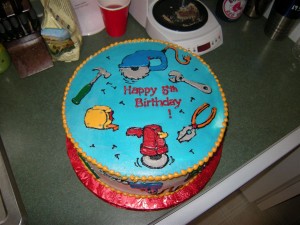 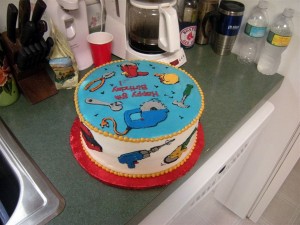 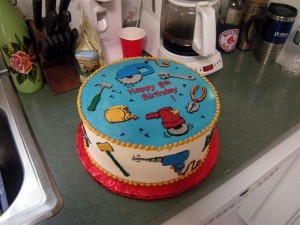 We loved it!  It looked great and it was very tasty.  Each year we seem to get stuck with more cake than we know what to do with but this one was *gone* by the end of the party.  Monkey loved it too.  He saw it on Friday, when they picked it up, and as soon as they got into the truck he started saying “Tools!”  We had a very challenging time keeping his fingers out of it but we managed to do so long enough for everyone to get a peek and for people to take a few pictures…then his finger landed in the frosting.

Before we had the cake however we were all just socializing.  There were 22 of us altogether and we can be a noisy bunch!  Monkey circulated well.  He played both inside and out, snacked on chips, drank out of his OWN glass (and not just out of any glass he could find) once I showed him it had his name on it, and snuck up on Papa (my maternal grandfather) 3 times to shake his hand!  It was so nice that Duhdee and I could both relax and not have to tag team to keep track of him.  None of this is in the category of “OMG” but it was a nice collection of new little abilities that made the day so much nicer.

It turns out that I forgot an important step in our pre-cake pep talk.  I forgot to mention the part where Duhdee had to cut the cake before we dug in…oops.  Not too much damage was done, lol.

After cake was presents…he sat and opened everything which is newish…he couldn’t do this last year.  Everyone was looking at him and taking pictures but he did great. 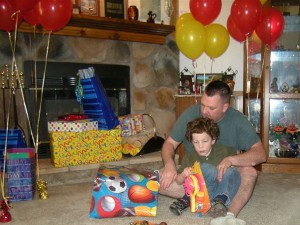 After presents was more chatting.  By the time the last guest left it was time for Duhdee and I to clean up and head out for our night out while Monkey stayed the night with Grammy and Grampa.  When we said good-bye he practically shoved us out the door, lol.

Phew.  Five hours of decorating, visiting, partying and cleaning and we were beat but our night was just starting!