we planned  a trip with Cupcake and her mom today.  We all went to Davis’ Farmland which was a ton of fun.  Monkey was a huge fan of all the different goats.  The farm specializes in endangered and heritage farm animals so there were some very unique animals there.  Umma wanted to bring home one of the baby Scottish Highland cows, it would totally have fit in the car.  Too bad they grow up, lol.

There was just the coolest splash park also.  Monkey and Cupcake were both running around and playing.  Monkey watched the other kids and imitated them (laying down in a shallow puddle on his belly, putting his foot over the nozzle, etc.) and he even engaged a little girl in a game.  I’m not sure what the rules were but they both seemed too.  It involved running toward a spray structure shaped like a Jeep and then running away.  I think the goal was to get their bellies but not their faces, lol.

Then the coolest thing???? BOTH kids fell asleep in the car on the way home! Monkey never does that!  It was a good day!

My favorite photo from today.  Monkey, Cupcake and that adorable litte calf I wanted to bring home. 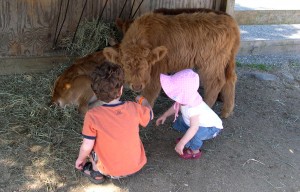 2 thoughts on “In happier news…”