Things aren’t much changed. We still don’t know why and likely never will. We’ve talked with Monkey about it but it’s hard to know what he understands. We’re trying to be careful to use very precise language so we don’t inadvertently scare him. We have discussed how sad we are. He has listened and offered no comment. I think it’s time we leave the topic alone now unless he brings it up. We’ve kept the teacher updated on what we have told him just in case she hears something from him at school.

We’ve moved on to preparing for Christmas over the last week. The house is almost completely decorated. Duhdee has a couple little things to add to the outside decorations but I’m flat out of places to hang lights. We have gone completely nuts here decorating. The last two years we ran out of time and energy and just never seemed to get it all together. This year we started the day after Thanksgiving and by the end of the weekend we were 80% done. I started my Christmas shopping Thanksgiving day too. Instead of venturing out on Black Friday I took advantage of the online sales and got the worst of it done. (Yes, worst, I hate shopping!)

Monkey, as usual, has been a huge fan of the Christmas decor. He’s all about “Santa” (last year it was just “Ta”) and the “Angel” (last year I don’t think he even had any word for it!) Earlier today, he and Duhdee were playing with an app on Duhdee’s new Android phone, that interacts with our home automation system, and turning the lights on the Christmas tree on and off. Geeks. Then Duhdee showed him that they could ALSO turn on the lights in the front windows too. Monkey took one look and said, clear as day, “Would you look at that!” which was then followed by a series of “Yay!”s which we could mostly hear over our own laughter. This boy is just full of surprises. 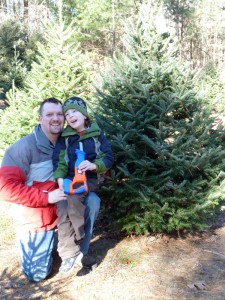 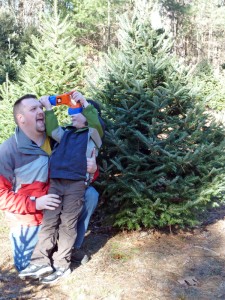