This morning I was preparing Caleb’s breakfast like always. He’s in a phase where he only wants grilled ham & cheese. Easy, I can do that! Then, two days ago, we ran out of ham and circumstances have conspired to leave us ham-less.

Yesterday, I cooked him a grilled cheese. He took a bite, peeled the bread apart and told me, “I want ham.” clear as day. YAY! But… “Sorry dude, we don’t have any ham. Eat your grilled cheese.” He ate 1/2 the sandwich and was all DONE breakfast. Fine.

This morning I didn’t want a repeat so I decided to pour him a bowl of cereal (Cinnamon Toast Crunch…total garbage but he LOVES it…) and get him a bowl of yogurt. This IS a Caleb approved substitute breakfast for moments we cannot deliver the grilled ham & cheese (or hot dogs or meat balls his alternate suggestions to us every single time this happens.)

Cereal and yogurt days make me happy because…EASY! I like easy before I start my caffeine consumption for the day! I had a spring in my step right up until I pulled the door of the refrigerator open and remembered that I had finished the milk the night before.

I needed another acceptable substitute breakfast fast…Caleb’s shower was nearly complete. Ahhhhh! I grabbed blueberry waffles from the freezer and popped them in the toaster. Then looked for something that might tempt him to eat them. I sliced up a banana and then remembered HALLELUJAH! We have strawberries in the fridge for strawberry shortcake! They were even sliced and had an nice sugary juice in with them! AND OMG! That’s homemade (Wilson’s Farm) whipped cream!

The spring was back in my step, I might have even tossed in a wiggle or two. I buttered his waffles, cut them up, slathered them with strawberries & bananas and added a dollup of whipped cream. I even took a picture to share on Facebook because, hello, MOM OF THE DAMN YEAR PEOPLE!

See! Just LOOK AT THIS! 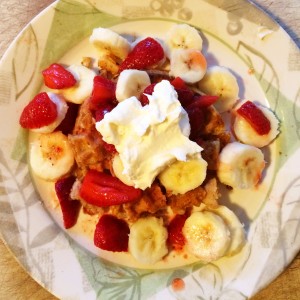 I got Caleb’s plate on the table with his drink…raising the spoilage a notch it was sweet tea instead of juice…just in time. He came strolling from the bedroom as he pulled his shirt down over his stomach. He looked at me, looked at his plate and told me…

I walked back into the kitchen to bang my head on the counter, and maybe drown my sorrows with the last of the delicious strawberries when he fired his parting shot…

(PS – I ignored him and he ate the damned waffles. *sigh*)