We took Monkey to Edaville yesterday. He was really excited about the trip, there was a TRAIN involved, after all, but we nearly had a massive failure. The problem started when Umma was in the truck, playing with her phone and got a notice about a yard sale at Fenway Park. Yard Sale. Fenway Park.

So, we took a quick turn off Storrow and made an unscheduled stop. We know better but did you catch that bit about a yard sale at FENWAY PARK?? Sometimes you just have to go with the flow…that is an important life lesson to practice, right? Plus FENWAY FREAKING PARK, people! Totally justified. Monkey, though, completely unimpressed. In fact, if he knew the word he would have said he was p*ssed. Totally and utterly, even.

After that fun little stop1, we drove over an hour to get to Edaville. Monkey was able to pull it together during that time and I think it would have gone pretty smoothly if not for the 30 minutes it took us to drive the last 1/2 mile. Unreal.

We sat quietly in the car enjoying a view of the lights while Duhdee bought the tickets and I really thought the worst of it was over. Haha! Silly, silly me. When I tried to get him out of the truck he crawled to the far side of the truck and yelled “No, stay here!” I don’t think so, little man! I managed to drag him out of the car and get him heading towards Duhdee. Then the train went by and blew it’s horn. ZOMG! After peeling him out of my butt we joined Duhdee at the park entrance. I literally had to carry him into the park. Once inside I had to physically keep him there.

Monkey and I stepped off away from everyone else and had a heart to heart talk during which I used the words “You listen to me” and “You had better.” Totally stellar parenting. Then I STFU and walked away. I was done reasoning with him, I knew he’d follow and I knew he’d calm down once I stopped talking to him. I have learned a thing or two about hyperarousal, it’s remembering it in the heat of the moment I suck at.

So, I walked around in a quiet area and studied the lights with Monkey hot on my heels. By the time we had made it to the bench where Duhdee was sitting Monkey was calm and ready to go on the train. We were going to let Duhdee wait in line and then join him at the end but Monkey wanted to stick together so…we stood in line…for over 20 minutes. *Twitch* We just missed the cut off for the 2nd train but it turned out to be a good thing because Monkey started shuffling his feet and grabbing his pants. When asked if he had to pee he kept saying “No! On train?”

Umma drew the short straw and took him to the bathroom. This was just plain stupid because everyone knows the line for the Ladies’ room is always 10 times the line for the Mens’! When we got to the end of the very, very long line Monkey started telling me “Pee? Money, pee!” Cwap. Several people looked at us apologetically but no one was going to let us cut. Then a man came out of the men’s room and cracked wise about there being no line for that bathroom, heh, heh, heh. 2 minutes later we exited the men’s room, done with our business, just as he finished scraping his jaw off the floor. There were 4 other women in there when we left.

After we got back in line for the train we had just a short wait left. Monkey was totally relaxed at this point and excited about having a turn on the train. The trains get quite packed and Monkey tried to cadge a little extra space by putting his feet on the bench, lol. We got him turned around and he didn’t much move for the entire trip. He was transfixed by the lights and the train ride. The only complaint we heard was that there was no tunnel but it is a cranberry bog so I think that’s to be expected, lol.

After the ride, Monkey announced he was ready for some pizza so we headed home. About 10 minutes from the house, he fell asleep. It’s a good thing he was so tired or I would have woken him up when I turned around and saw this… 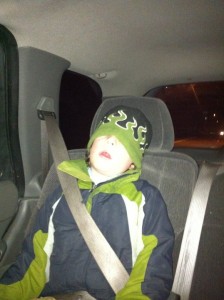 Don’t judge, you would have laughed too.