I am republishing this post from February 21, 2010 for two reasons.

I try to focus on the positives here though I do let loose with rants from time to time ((if you’re new here or a first time visitor…check out the School category, it’s where I have posted most of my stroke inducing rants…oh dear lord I just re-read some from 2008 and it all still makes my blood boil!)). When talking about Monkey I always, always, always list the ways in which he rocks, the funny things he’s saying and the huge strides we see him making. Who doesn’t prefer to rave about their kids?

But we still have those moments when we just want to lay down where we stand and quit.  Knowing that we are going to have these moments for the rest of our lives is just *sigh*.  We had one on Friday.

Last week was school vacation week and, for a variety of reasons, we managed to do nothing.  I finally put my foot down and insisted that I get off ONE of the days that I had been scheduled to take.  Naturally, Friday dawned with an amazing array of utterly ridiculous work issues that I was dealing with on my BlackBerry and getting progressively more angry over.  I finally, not so graciously, told them they needed to just deal on their own…I was out of coverage…really!  It’s good to start outings with a positive attitude.  Ahem.

So The Plan (dundundun!) was to take the train to the Aquarium.  TRAIN!  TRACKS! PENGUINS! everyone/I agreed it was genius.  15 minutes on the train and Monkey decided he was “all done?  Allll done?  ALL DONE!!!!!!” but we hadn’t even crossed the city limits.  *BIG GRIN* just for the b*tch staring at us from across the train!

Once we got downtown we had to decide whether to walk the last 15-20 minutes in the cold wind or take 2 more trains and walk 5 minutes in the cold wind.  Monkey had bounced back!   He was eager for another ride on a train so we took the 2 trains and it was fine.  Then we got off the escalator, at street level, and Monkey said… “Grampy?  Home? DOGS?” in that voice.  You know, that voice that means the day is over, give it up, go home…he is done.  Blah.

Screw that.  We’re going to see some damn penguins.  We had to wait in line for tickets and Monkey was a mess.  Great!  Then some crackhead insisted that we needed to take a picture!  A souvenir of our lovely trip!  That you can buy after your visit!  She got one shot and a “No, we’re done.” when she started squeaking a fucking WHALE in our faces to get Monkey’s attention.  He promptly went limp noodle, of course.  OMG.  And we hadn’t even bought the tickets yet!  Are you screaming “JUST GO HOME ALREADY!” yet?  You should be.

$55 later we had 3 tickets in hand and we stopped to take a deeeeeep breath by the harbor seals.  Or “WHALES!”  Whatever.  He calmed down.  I calmed down.  Duhdee was studiously avoiding all eye contact with me…I wonder if I had my crazy eyes on?  Huh.

Anyway! Through the door we go!  Hand stamp?  Check!  Bathroom break?  Check!  8 billion other crazy ass parents each with their perfect 2.5 kids?  DOUBLE CHECK!   We’re having a good time now!  Monkey?  Not so much.  He was, once again, stuck on the “Grampy?  Home? DOGS!” channel.  I wish it came with a mute button.

Fortunately, the penguins are right inside the door.  We were able to get him a relatively undisturbed viewing location and once again…calmed down.  Then, after 10 minutes or so, someone (*cough*Duhdee*cough*) suggested maybe we could go look at other things.  Fool.  He was happy-ish…and most certainly not whining…why MOVE?  But we did.  Aaaand the “Grampy?  Home? DOGS!” channel came on full blast.

We somehow made our way to the top of the big tank, dragging our Monkey (and tails) behind us, so we could look at the turtle.  And a creepy ass eel.  And a lot of other fish and sharks that I couldn’t really focus on because I was holding Monkey up over the half-wall (that he couldn’t see over, way to design for the kiddies, guys!)  and trying not to drop him into a 3-story, shark infested, tank…with barracudas.  Good times.  But!!  He stopped whining!  He relaxed and laid his head on the half wall, bending my back in ways it was never designed to bend.  Even if it meant needing a wheel chair to get home, I was NOT MOVING HIM.

Eventually, though, I had to.  My back was screaming, he’s a big boy! As soon as his size 12’s hit the floor…do you just want to guess what happened, because I’m sick of writing it.  We skipped 2/3’s of the Aquarium but at that point I could not have cared less.  I feel confident that our fish-to-dollar ratio was reasonable even if our dollar-to-minute ratio was not.

Then we got back on the trains…all 3 of them…again and Monkey was “all done?  Allll done?  ALL DONE!!!!!!” for most of it…I think.  I may have entered a fugue state ((FYI, I use these random words just to make Duhdee look them up in the dictionary)).  We finally dragged our thoroughly exhausted behinds through the front door so Monkey was HOME! and could see GRAMPY! and the DOGS! but instead of being, you know, happy…he burst into tears and had a fit over the fact that I was NOT WEARING MY PAJAMAS ALREADY AND WE’D BEEN HOME FOR .25 SECONDS I’M THE WORST UMMA EVER!!!! WAHHHH!

So, yeah, it’s not all sunshine, roses and unicorns flying out of our butts around here.  Come to think of it…Friday was just about as much fun as having a unicorn and roses…with thorns…flying out of my butt!

Just prior to the squeaky whale that sent us over the edge. 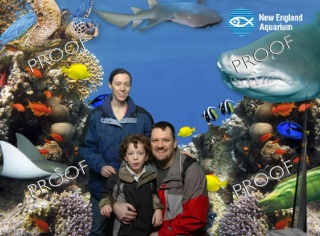 Don’t we look like we’re having *fun*? I’m holding his shoulder in a useless attempt to stop the impending limp noodle. Duhdee is already braced to hold him up. BIG SMILES EVERYONE!

17 thoughts on “So, it’s not all sunshine, roses and unicorns flying out my butt.”