We’ve started on the Week 2 pack of the study drug so I thought it would be a good time for an update.

And the update is…

We’ve seen nothing. Caleb was still too anxious and shy to participate in Halloween in any way. His social anxiety is still just the same as always. We haven’t seen any changes in language or behavior either. There have been no reports from school that he’s suddenly doing X, Y and/or Z.

What does that mean? Nothing! We may be on the placebo, we may be on a very low dose or we may be on the full strength drug and it’s not going to work for him. I am not stressing out about this or worrying over it. We went into this assuming he would get the placebo. We are going to reserve all judgement until we are on the trial extension in January.

I wish I had better news but I’m glad I don’t have worse news like…he’s become a total aggressive nightmare and we are dropping out. Which would really suck!

On the positive side, Caleb is taking the pills 3x a day (at least 4 hours apart) and he’s taking them without anything but a sip of juice to eliminate the flavor after it melts in his mouth. He’s taking them, to quote Eric, “Like a big boy.”

Speaking of a “big” boy…I have something to show you… 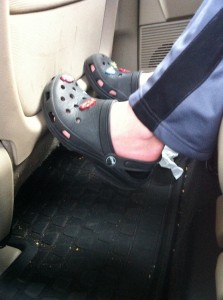 That is my baby’s feet1 very nearly touching the FLOOR in our truck. The FLOOR! And, to make it worse, he’s in a booster seat…if he wasn’t his feet would be ON THE FLOOR. *sob* I hate these little reminders that my baby is growing up so fast!