I am useless in the kitchen.  I bake, I boil and I can cook grilled cheese sandwiches but that’s it.  It’s pitiful, I know, but I don’t feel any need to change that because Duhdee loves to cook and he’s really, really good at it.  As if he needed any more characteristics to prove, beyond a shadow of a doubt, that he is Duhdee’s “MiniMe,” the boy has a burning desire to cook as well.  Oh, the ways I suffer.

The sound of a cabinet door being closed or utensils being gathered causes Monkey to drop whatever he may be doing and run straight for the kitchen.  He loves to add pinches of this and that to Duhdee’s recipes.  He has to be supervised very closely because he will add things that should not, under any circumstances, be added.  For instance, garlic croutons to Duhdee’s coffee?  Duhdee was really confused as to why he coffee tasted so terrible until he cleaned out the pot, ha.   Extra, extra, extra salt?  Sure thing!

Sometimes, though, Monkey is not allowed to help.  The rule in the house is that if something is on the stove he is not allowed to help.  Monkey hates this rule and has sat in time-out on more than one occasion due to his non-violent, but persistent, protests.  Duhdee recently made a delicious pot of beef stew1 and, since this meal revolves entirely around a stock pot on the stove, Monkey was forbidden to help.  What is a poor Monkey to do?  He’d already sat in time-out for violating the rule so he decided to improvise. 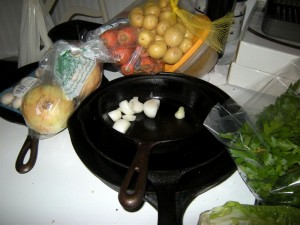 He stole some of Duhdee’s onion and “cooked” on the kitchen table.  Heh.

Now here’s a question for you, how do you decide if a child is safe enough to assist with cooking on the stove?  Since age is clearly not going to help me here, what would you look for in terms of readiness?

12 thoughts on “The desire to cook is strong in this one.”