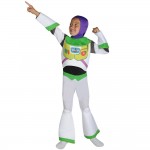 Monkey doesn’t like Halloween. He never has. He tolerated costumes long enough for photos when he was younger but he would never go door to door. Now that he’s older, he doesn’t even tolerate the costume. Somehow his teacher convinced him to dress up last year and she sent us a photo of that event but he wouldn’t wear it at home, not even to pass out candy.

Last night, I made Monkey cry. I coerced him into wearing the costume I picked out this year despite his repeated declarations that he didn’t want one. I finagled him into that costume, had him look in the mirror and then helped the poor crying boy out of it. What is wrong with me? Why can’t I just stop this? I felt, and still feel, like an utter asshole for forcing such a non-issue.

Me, it turns out.  Sometimes I hate Fragile X and what it’s done to even the smallest, pointless dreams I had…