Mother’s Day started out wonderfully, Duhdee and I were lounging in bed enjoying the novel experience of waking on our own terms.  There was no whining (mine), no wrapping of the covers around heads (Duhdee) or maniacal laughter (Monkey’s, naturally) just quiet.  Did I mention the lovely pillows and the bed that felt as if it were an acre of white, puffy clouds gently cradling us?  *Bliss*

As we checked out we experienced the first of our little “bumps.”  I stood looking out the window of the inn and noticed two things.  One, the cafe across the street had a “Now Leasing” sign in the window…so much for walking across the street for breakfast!  And two, the store two doors down from the shuttered bakery…the ONLY place I could buy the gift that I had picked out for my mom…was dark.  It was supposed to open at 11 AM, just the time we were checking out, but there was not a single light on inside.  We quickly rearranged the schedule in our heads, we would drive out to another restaurant I knew of for breakfast and then come back in town for the gift.  No big deal! *Grin*

As I was putting the suitcase in the back of the truck, we experienced the next of our little “bumps.”  I saw, with horror, that the cards I’d left in the back overnight were soaking wet.  Somehow the window in the cargo area had developed a leak and a small area, just the size of the greeting cards, was soaked but everywhere else, you know, all the EMPTY SPACE, was perfectly dry.  Both Mother’s Day cards, my grandfather’s birthday card and my nephew’s birthday card were totally ruined. *Sigh*

We drove out of town and the alternate restaurant I had picked had been replaced with another restaurant that I’d never tried and it looked a bit sketchy.  OK…alternate restaurant two was decided on and, finally, I could get something in my belly.   Just in time too because I tend to be a bit grumpy when I’m hungry.  (That might be an understatement.)  When we walked in to the restaurant I decided that things were looking up, I saw just exactly what I wanted to eat on the “Specials” board!  Strawberry stuffed waffles, I was so excited.  The service was prompt, the coffee and tea were hot.  Definitely looking up.  Just as I finished my first cup of tea the waitress brought out my waffle and Duhdee’s monster omelet.  I dug right in and then looked at Duhdee in dismay.  There were NO strawberries!  Our waitress walked by just as I was standing up to look at the “Specials” board again and I grabbed her attention.  “I thought I ordered the…oh…right.”  I ordered the waffle.  The “strawberry stuffed” yumminess that I had wanted?  French TOAST.  Damn.   The waitress began to offer to place the order for the french toast but I just smiled and sent her on her way. *Pout*

After breakfast we drove back toward town and stopped to replace the cards that had been ruined over night.  It was now nearly noon on Mother’s Day and the row with the Mother’s Day cards?  PACKED.  All men too, lol.  After making our choices we drove the rest of the way back in to town so I could grab the gift I’d chosen but there was one slight problem…the store?  STILL closed.  There was no sign indicating when or if they would open that day, just a list of their normal store hours which included 11-7 on Sundays. *Twitch*

Duhdee and I sat looking at each other for a bit.  Then I perked up, we had seen a great little nursery and farm store just out of town when we had been looking for a place to eat breakfast.  We’d seen some gorgeous hanging baskets that would be perfect.  We drove over and were able to quickly decide on one of the baskets.  After we paid for it we walked out of the store and I was greeted with the cutest little stone Bulldog butt I’ve ever seen.  Hmmm, come to think of it, it may be the only stone Bulldog butt I’ve ever seen.  I tried to convince Duhdee to buy it for me but at $179.00 he was not biting.  I stood looking at it for a while longer, the little curl of a tail on the back just set me off.  *Giggle*

So, finally, at close to 1 PM we show up at my parent’s house to chat for a bit, pack up the kid and then take off for home.  For some reason SOMEONE (me) told Grampa, in the course of a conversation, that they had never been to a Cabela’s store.  I swear he couldn’t have been more shocked if I’d told him I thought the 2nd Amendment should be repealed (him, lifetime NRA member…he’d rather I admit to being a Commie.)  It seems that one had opened in Maine not so long ago and, ever since, Grampa has been practically living there.  SOMEONE (me again!) also happened to toss out “The store I’d really like to go to is Tractor’s Supply Co.”   Wouldn’t you know it but Cabela’s and Tractor Supply are located very close to each other?  Grampa and Grammy were pretty eager to take us and I did really want to see both stores so, instead of packing up and leaving, we found ourselves headed in the wrong direction on the highway.  *Oops*

So that’s how I found myself shaking my head and staring up at a 30 foot mountain of dead, stuffed animals on Mother’s Day. *Shudder* 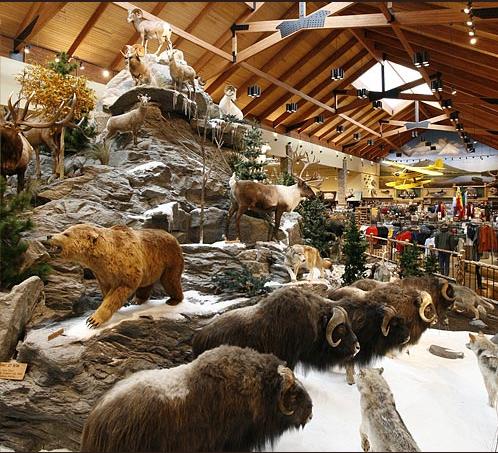 4 thoughts on “The unexpected.”