Or, more precisely, what do you give a man who buys himself everything he wants?  This is the dilemma we face each year with my father.  Christmas is usually pretty easy, we hand over IOUs to my mom and dad for Red Sox tickets and then plan to spend a couple DAYS waiting in the infamous online waiting rooms praying for a chance to buy tickets at face value and spare ourselves the horrendous markup from resellers.  *Sigh* so not looking forward to that again.

Anyway.  His birthday is always a challenge.  He was asked point blank this year what he wanted and he said “I buy myself what I want.”  NOT helpful.  Duhdee and I racked our brains and finally came up with the PERFECT idea.  We went to one location and when we calculated what we needed, he advised us to go to someone else.  He just couldn’t deliver the quantity we needed at a reasonable cost.  Bugger.  So we began calling this other supplier.  He owns his owns his own business and he’s described as “independent” which basically translates to “has no answering machine, good luck!”  For 3 days we tried calling and we had no luck.

On the day of my father’s birthday we still hadn’t managed to reach the supplier so we had to come up with a good IOU.  We decided to give my dad a sample of his birthday gift.  After dinner with a bunch of their friends my mom handed my dad a gift bag and said “This is from all of us” and indicated the family members.  My dad looked scared, lol.  He told the others “It’s not good when they gang up on me!”  He weighed the bag in his hand and finally opened it up to find…another bag, this time a small paper bag with the top folded over.

He took that bag out and gently squeezed it in his hand.  He looked confused.  I think he knew what was in the bag at that point but he couldn’t figure out what it meant.  He slowly opened the top of the bag and peered in and then looked at each of us.  We were all snickering at this point but the guests had no idea what was going on.  Finally he spoke, “Ooookayyyy, dirt?” At which point everyone cracked up and started tossing out ideas as to what it signified.  “They think you’re older than DIRT!” was the final concensus amongst the guests, lol.  Once the laughter died down we let him know that as soon as we could get in touch with the supplier there would be a WHOLE lot more of this being delivered.  Enough to put in a front lawn!  He was then very excited.  It was something he’d been wanting to do for the last two summers but never seemed to get a chance to work out how much and where to get the loam he needed.

Earlier in the week he’d been out mowing the long strands of grass growing among his rocks and we kept hearing rocks bouncing off the mower blade.  It was so loud that the neighbor (who lives 1/4 mile away) was giving him a hard time about how many rocks he had mowed this week.  He mentioned more than once, after we’d decided what to get him, that he needed to take care of the “lawn” soon.

There was much discussion that night, around the campfire, about whether we’d picked the right supplier or not.  There were several options in the small town where their camp is located and they all come in varying degrees of “independence” which, it turns out, sometimes means “unreliable” and sometimes means “total @sshole.”  So it was decided that we’d picked the right guy for the job.  My dad and Duhdee stopped by the guy’s house the next morning to leave him a note in an effort to at least let him know someone was looking for him!  By the time we left, a week later, one of the estimated five loads of dirt had been delivered. 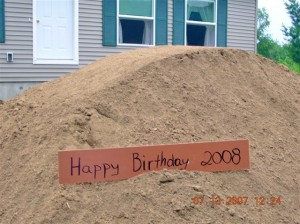 Isn’t it purty?  My dad made the sign and then made the entire family POSE in front of the dirt.  In the rain.

One thought on “What do you give a man who has everything?”