OK, not really…but I’ve been thinking lately about how good Monkey is, and always has been, at figuring out his own sensory needs.  We tried a brushing program for a period of time when Monkey was two.  We saw imediately that it helped and he saw immediately that it helped as well.  He very quickly began running to grab the brush and then show us where he needed to be brushed (he’s always had a preference for his legs, this goes for deep pressure as well.)  When he was done, he would tell us.  It was pretty amazing.  After about 6 weeks he stopped making requests and would let us know that he didn’t need it.

He also created his own body sock.  Duhdee has a shirt he wore for soccer practice when he was younger.  Monkey has claimed it.  He will strip to his diaper (sometimes further, lol) and pull the shirt on.  He enjoys the silky fabric and he will get his feet in the hem of the shirt and stretch.  The shirt provides the same sort of resistance/deep pressure input that the body sock does and he figured this out all on his own.  If he can’t find the shirt when he needs it he will ask for help.  It truly does allow him to relax as this picture shows (yes,  he is asleep, lol.) 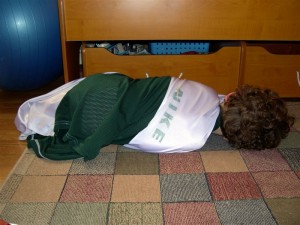 3 thoughts on “A sensory integration prodigy.”