Eric isn’t going to be thrilled with this one.

Since Caleb was born we have been a united team. We don’t always see eye to eye but we’ve never strongly disagreed about how to respond to any situations concerning Caleb. Mostly he leaves it to me to research whatever issue we need to tackle and then we move forward together. Mostly.

In yet another example of the stress the end of the STX209 trial has brought to our lives, it has left Eric and I frequently staring at each other across a table or a room…united in loving each other, united in loving C, united in wanting the very best for him…but unable to agree on what that should look like.

If you know me (or have read anything here, really) you might have picked up on my tendency to lose my ever-loving shit when faced with surprises or change. I respond very quickly; most times with anger and then, once my brain kicks in and my adrenaline settles down, I cope. I figure it out. I move on. It’s over.

So my reaction to the news that the trial was ending was predictable…totally, utterly predictable. Right up until I jumped off the rails and refused to get back on. Much to Eric’s surprise, I refused to even discuss getting back on…the best he got when he tried was, “I don’t know.”

His attempts to calm me down, to try to swing my focus back to moving forward were met with two words and one finger. He tried a lot of different approaches. He tried to remind me that it wasn’t just about us, that there was a larger community out there. He tried reminding me that his job created a responsibility to act rationally. He tried reminding me that this would end and I didn’t want to make rash decisions that would affect Caleb into the future.

I listened to him, I understood everything he was saying and even agreed with it in theory. And, yet, I could not do what he wanted me to do. I could not call the research clinic, make the appointment to remove him from the medication and then move on. I could not do it. I counted out the pills we had left, I read the titration schedule and then I continued to hand him his pills day in and day out.

For 2 1/2 months I watched families lives fall apart as their kids weaned. I told some people that we had not yet begun to wean but certainly not everyone. A few amazing people who I told, offered to send me their left over pills. Of course, I could not accept them but I did appreciate the gesture. Eric gave up on trying to convince me. I even let myself forget, sometimes for hours, that the end was coming. Starting the titration was giving up hope…it was accepting that we had lost…that we had fought for Caleb and hundreds of other kids and we had lost. I couldn’t do it.

Last week, after school ended for the summer (C is in an 11 month program) and after the news piece was filmed…I gave up. We are now weaning Caleb from the STX209.

This past weekend three of my beloved Birches were playing tourist in Boston and I took Caleb along with us. 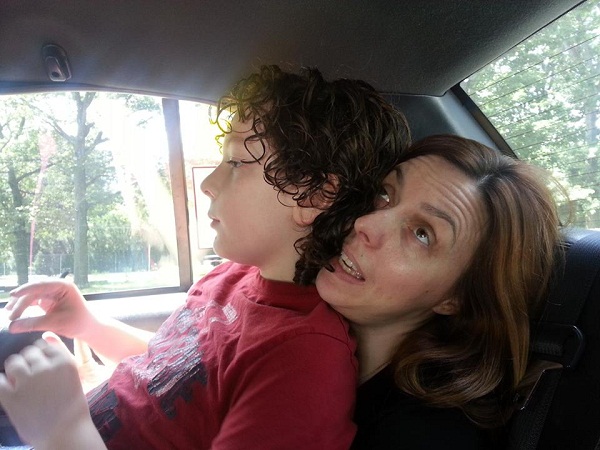 This lovely shot was taken by Holly on the way INTO town. He was in my lap because he needed some deep pressure and he would NOT STOP TOUCHING the cab driver, who was driving and attempting to concentrate.

It wasn’t good. He was impulsive, anxious and completely hyper-aroused. Even though we went to places he’s been before, places he likes, he couldn’t do it. We rode in an elevator, we ate fast food and then we rode on the T…all things he adores. And it reduced him to tears. I had to jump in a cab near Boston Common and bring him home.  By the time we got home he was crying so loudly that my MIL heard him from behind a closed door with an air conditioner running next to her.

It took an hour to settle him down.

So now, I have two words and one finger for … well, the world. He’s hurting for no damn reason at all, I know how to fix it but I can’t. Isn’t that some shit?

I think we may have been the last…I kind of hope there is someone else out there holding on to the hope that STX209 gave us. I feel so broken and it makes me unbearably sad that it’s truly over.

42 thoughts on “Broken and stressed…”