Another Christmas has come and gone, we had a month of elf hijinks (Elf on the Shelf: 2013 Madness), a month of decorating, baking and shopping. It’s my most favorite month of the year.

To be honest, I’m not sure how I’ve maintained this love of Christmas. Christmas with a child with special needs has been a unique blend of joy and heartache. When Caleb is happy, the room glows with it. When Caleb is stressed or anxious, there is no glowing…just tears. Many, many tears…both his and ours.

There have been times over the years when Eric and I have looked at each other…worn out, emotionally exhausted, physically drained…and I’ve wondered, “Why? Why us? Why our son? Why can’t joy just be joyous for a change? Why does it have to bring such anxiety with it?” There have been times over the years when I’ve felt selfish for wanting another Christmas like I had as a child because it isn’t about me anymore. I would recall my father telling me that the best part of Christmas is seeing it through your child’s eyes and I would think…Christmas never looked this dark and scary before.

Eric and I learned to adjust our expectations, we tried out traditions and rejected those that didn’t work for us. There is no driving around looking at Christmas lights for us. Caleb has no interest and slowing down in front of strange homes triggers his anxiety. I can see why, he was always wondering if we were stopping and expecting him to go in to a new place with strange people. No amount of reassurance eliminates that. So, we don’t go.

We learned that presents triggered his anxiety. There was too much excitement and tearing of paper and wondering what was inside. He also doesn’t like being the center of attention. We wrapped fewer gifts and we did not pressure him to open them on any timetable. It once took days for Caleb to open all of his gifts. So not the Christmases that Eric and I envisioned.

We found traditions that Caleb loves, going out to find and cut our Christmas tree was the first, the Elf on the Shelf has become another favorite. We found things about the way he enjoys the holiday that make us laugh, the angel on the top of the tree is greeted every time he walks into the room, “Hiya, angel!,” the way he races up the stairs to watch the tree lights slowly turn on (Eric has them on timers, shocker.)

But it was still not the Christmas that we dreamed of. Every year we tempered our expectations but still had that moment of sadness at some point when we watched him struggle through what should have been fun. And yet, we kept at it. We kept adjusting to wherever he was at that time and we kept pushing.

Last night, on our way home from my parents’ house after a looooong, loud, present filled day, Eric looked at me with tears in his eyes and said, “It took 9 years, but we finally got the Christmas I dreamed of.”

And he’s right. We cut our tree, we welcomed the elves back into our home, we asked Caleb what he wanted Santa to bring, and he told us! He woke us with the word, “Santa!” and raced to the tree eager to begin. He pulled presents out from under the tree, read the names and handed them to Mommy & Daddy appropriately, he opened his…happy and commenting on each. The things he had asked for were under the tree and he said, “Yes, we got it!” when he found the things he wanted most.

After the rush of opening presents, he and Eric made us breakfast (french toast) using one of Caleb’s most desired presents (a pink mixer!) We filled our bellies and collapsed in a heap on the couch all snuggled together. Eric dozed, Caleb played Angry Birds and I just soaked it in. I’m not sure I’ve ever been more content, ever.

Then there was more. Rushing and excitement and loud conversations at Grammy & Grampa’s house. There were cousins to jump or step on (they’re all much older, they can handle the roughhousing!) There were hugs and high fives and Merry Christmases. There was a frozen pizza, wrapped up by Grammy that instantly became his favorite gift ever. It was cooked and completely consumed by Caleb that afternoon. Blur, blur, blur…and then it was over.

We were on our way home. Caleb was quietly playing with new toys and reminding us to stop for gas (which we needed) and maybe some “KFC” (which we did NOT.) And riding down that dark highway was when it hit us. It was Christmas, really and truly Christmas…the one we had feared we would never have, the one we had mourned in years past…it was here, we did it. He did it.

One image that will stick with me forever is watching Caleb stop throughout the morning to study the three pictures that Santa left behind when he came to drop off presents and pick up the elves. He would look at them, one after the other, very seriously. It was almost like he had to keep coming back to prove to himself that he had seen what he thought he’d seen. It was pure innocence and wonder. 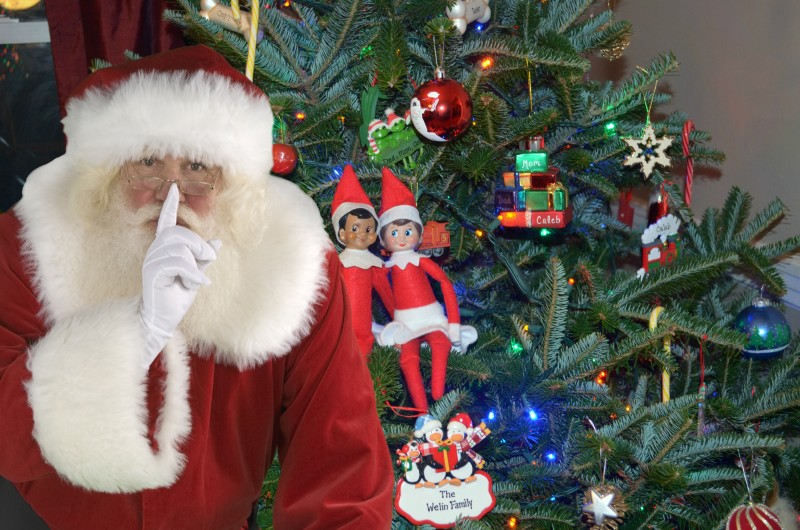 Which is exactly what I wanted Christmas to be for him, and for us. I finally got to see it, Dad! It was amazing!