Not so long ago, just a smidge under two months ago to be precise, Monkey surprised Eric1 and I by developing this new skill…playing with TOYS.

We were so thrilled and after waiting 7 1/2 years I was expecting him to make baby steps in this arena…things like perhaps adding a few additional toys to his repertoire. What I didn’t expect was for him to jump feet first straight into creative play…which should have clued me in that he would absolutely go in feet first because that’s just the Monkey way!

This is one of Monkey’s favorite toys to pretend with…you may recognize these as pieces of the Discovery Toys marble run, which he loves beyond words. 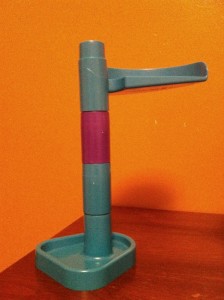 He’s not using it in the usual way. He will bring it to me and put that top piece on saying “Fix it.’ and then wait for me to sing “What’s gonna work?” to which he’ll respond “Teamwork! Woahhhh!” Parents of other young kids know what this is, I’m sure. For the rest of you… 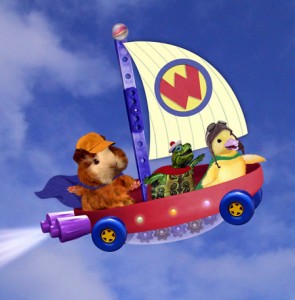 He’s found a way to build his own WonderPets boat! He thought of it all on his own and it took me a little bit to figure it out but it’s so obvious now. And brilliant too of course.