It was an eventful evening here tonight. First, we were told that Caleb fell asleep at school today which is troublesome…he never naps…why is he doing it at school and not at home on a Sunday afternoon when I can take advantage of it? All kidding aside, this can only mean one of two things….either he’s getting sick or he’s going through a growth spurt.

Unfortunately, it appears to be the first. He was a little rashy and slightly feverish but ate fine and acted like an itchy version of his normal self. We shuffled him off to bed as early as possible though our bedtime cannot be moved earlier due to that trial medication. He has to wait at least 4 hours between doses and that third dose can’t happen any earlier than 8. SO, when he was finally cleared for a crash landing in his bed he got a little demanding…of course he’s incredibly sweet when he’s demanding…he simply asks for what he wants with a slight smile and a lilt to his voice…over and over and over and over until we just give in.

Tonight he decided he needed some Sneaky cuddle time. Of course this is NOT allowed, you are not supposed to touch the elf,but we had requested some vitamins from Santa just in case something like this came up. So we handed over Sneak and Caleb smiled, kissed him good night and tucked him into bed. Aww!

When I went to get Sneak to help with the mischief for the evening, I found this… 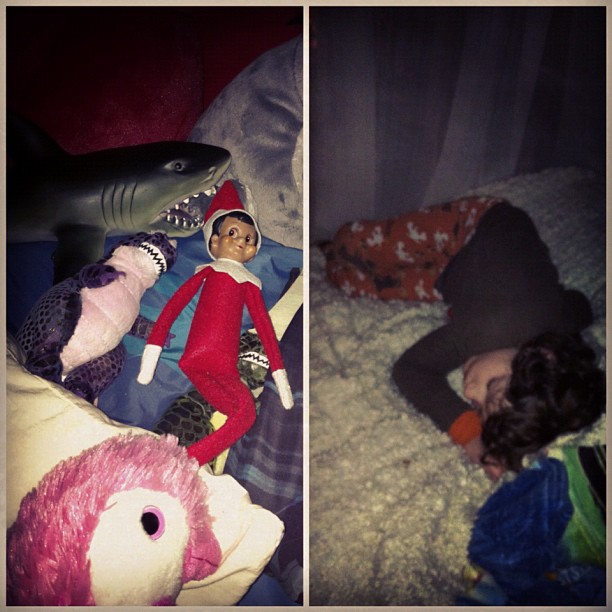 Umm…whatcha’ doin’ Sharkbait? It looks like I rescued Sneak just in time! 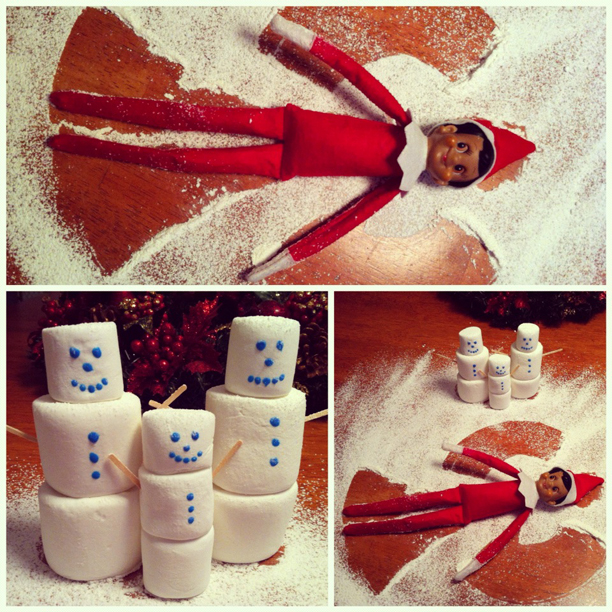 I would be worried about who was going to get stuck cleaning that mess up tomorrow but I’m pretty sure I’ll find Caleb licking the table saying, “Mmm, needs sugar!” by 5:30 AM. If I stay in bed long enough he should get the whole pile cleaned up. Here’s hoping he’ll feel well enough to go to school, otherwise Eric won’t be too pleased with the sugar high Caleb will be riding.