Thanks to the support and wisdom of the fragile X family I’ve gained, I gathered up my inner Piglet in my arms and, in that quiet voice moms everywhere have perfected, told him to just suck it the f*ck up right now or so help me ((Look, I’ve never claimed to have a patient nature but I save the toughest love for myself!)), and took Caleb to the circus. I was prepared for either a rousing success with a happy little Monkey sitting between his buddies saying, “Would you look at that!” or a dismal failure with a scared, crying little boy standing outside the big top in the rain begging to go home while his friends and dad enjoyed the show. So, naturally, I got something right in between.

We had a very happy Monkey who talked about his friends Peter and Jesu-rique (Jesus Enrique in Caleb-speak.) and the circus all morning long. He gave up his booster seat for the day so the boys could all smoosh into the middle seat together. He laughed when his friends said “feeeesh!” to him. When they asked him to say their names he would do so and their faces lit up. He even answered some of their questions appropriately which brought a huge grin and an excited, “He talked to me!” out of them each time. You don’t have to be with these boys very long to see the love and friendship there, it’s a beautiful thing to see. 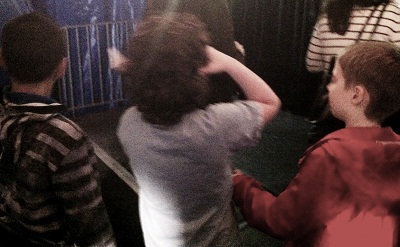 Monkey’s anxiety started to ramp up as soon as we got out of the truck but he followed his friends into a crowded elevator and through the revolving doors onto the busy street. Then he stopped. “Bathroom? Batttthhhhroom?” This is a favorite escape tactic so we exchanged glances and decided we should err on the side of caution with this and found a restroom. He and all the boys ended up having to go. I was really impressed that even with the excitement the other boys were super patient and even thought ahead so we didn’t end up having to make 3 separate trips to bathroom.After we crossed the street to where the big top was set up, we were greeted with quite a long line for bag searches. Monkey was blocking his ears but he stuck with it. In fact, we managed to get through the line, through the lobby area and to our seats with very little issue. We sat with Eric and I bookending the boys with Caleb in the very middle between his friends. Eric bought popcorn and water for everyone which killed the time we had to wait. When the lights dropped and the ring master’s voice called out for the first time I found myself staring at Caleb. I could see the anxiety on his face. He looked at me and stood up, I signed “sit” to him and he sat back down.

It was a rough beginning, Eric and I were exchanging a lot of looks. We were not at all sure he would make it. We tried a few things without much luck and then finally offered him his iPad and his noise cancelling headphones. Caleb settled back in his seat, crossed his legs, pulled up PBS Kids and started watching Curious George. I went back to watching the show, casting covert glances in his direction. He would watch the iPad, then look up and watch the show, then go back to the iPad. It was working!

It worked beautifully right up until the last act, of the last performer, before intermission…the contortionist. He was really enjoying her performance, it was much quieter and calmer than the others had been. He kept pumping his fist in the air and saying, “Yesssss! Yessss!” whenever the audience clapped. Then she stood on her hands, arched her back, took up a bow and arrow with her toes and she shot a balloon on the other side of the ring. *POP*

And *POP* went Caleb’s calm. He jumped to his feet and began begging to go to the bathroom again. I looked at my phone and realized we had been there for 1 hour and 15 minutes! OMG! The other boys jumped at a chance to go so they all took an excursion while I guarded the last bits of popcorn. When they came back, Caleb still wasn’t happy. He said he was hungry so Eric took him out to the lobby to buy the boys each hotdogs. He had to bring him back in though because he wouldn’t listen to Eric and wouldn’t stand in line. It was a very long wait for him to get back, finally, with those hot dogs.

I’d hoped eating would distract and calm him and it worked, a little. When the show finally started back up we gave him the iPad again and crossed our fingers. He just had to make it 40 more minutes…

By the time the last of the cheers died down and the lights came up we were all ready to go. We did stop in the lobby, one of the boys wanted to spend some money he’d brought and I had it fixed in my head that they needed to leave with those plastic, light up, swords. I’m not sure why this was such a big deal to me but it was…so we made it happen.

We stepped out into the rainy evening and finally took a deep breath. We had made it. HE had made it. 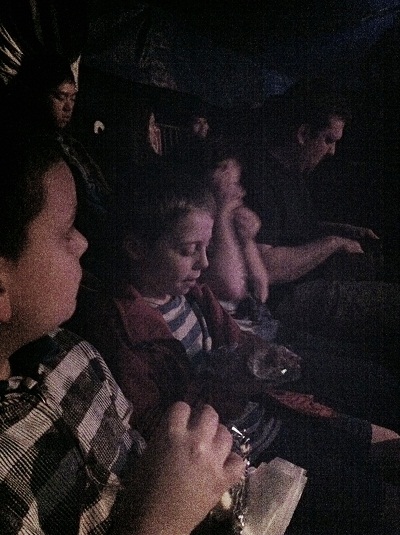 It wasn’t the most inspiring of victories, my head hurt from the noise and stress of the day, Eric and I were a little snippy with each other while making dinner plans, but we all did it. Together. There is no way Caleb could have made it without those boys, they’re the heroes of this story. When he fussed, they made him laugh. When he struggled to sit in his seat, they touched his legs and stomach…giving him comfort and soothing him. It was amazing. And on the entire trip home as my patience with his anxious scripting grew thin, the boys chatted happily together and tried repeatedly to draw him in even when he was completely not responsive. They never gave up…it never even crossed their minds to give up.

Rough as it was, undocumented as it was (there was no way I could take many pictures while he struggled so badly!)…it was another inchstone met. Caleb’s first typical circus? CHECK!