First, Duhdee totally broke my heart when he said no to this…

I don’t understand how anyone could say no to an 8 month old Australian Shepherd mix.  Sure they are flipping INSANE but they’re insane in that “OMG, let’s do it again” kind of way.  There are very few dog breeds that I’m willing to add to the family that I think could keep up with our little Monkey and an 8 month old, cracked out Aussie just might be the perfect solution.  But *sigh”

To salve my wounded heart we decided to go to the fish store to add the new angelfish I had been wanting for a while.  We’d had 3 at one point but one had a fin deformity and passed on after a few months to no one’s surprise (she had a Nemo fin, come to think of it.  Poor thing.)  Then the large male just died.  He was fine when we went to bed and when we woke up he was dead.  He was the big guy in a tank of Tetras.  The water quality was fine.  We were very sad.  That left one lonely girl in the tank and she has ruled the roost uncontested since but they do well in groups and the tank seemed so empty.

So, we went to the fish store and bought 4 more!  They’re very pretty, I wish I’d mastered the art of photographing fish tanks but, alas, all you’d see is the reflection of my flash and the flash is not nearly as beautiful.  They look basically like this, 2 are mostly silver and the other 2 are more black. 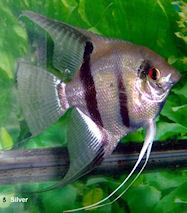 Monkey HATES the fish store and there are probably a thousand reasons but the ones that I suspect rank highest on the list are:

After the fish had been bagged, Monkey immediately started asking to carry it and the teenage boy who’d helped us even managed to put one bag in his hands before I realized what was happening.  I startled him a bit when I snatched it out of Monkey’s hands and said, “I don’t think that’s a very good idea.”  Which, I think, should qualify me for an award of some sort…the understatement of the year, perhaps?

All through the check-out process and the 30 minute ride home Monkey asked to hold the fish repeatedly and we stuck to our guns and said no every time.  He was not a happy camper.  Of course, after we got home he jumped on YouTube and immediately pulled up this video:

See how smart we are?  After the fish were in the tank he grabbed one of the empty bags and acted out part of the scene…the bit that starts at 1:45.

Yeah…really glad I grabbed that bag from him…

One thought on “It was a big day here!”