Yesterday we decided to go bowling. Normally we never would have even thought about this, it’s loud, the bowling alleys (at least around here) seem to be dark and they smell weird…greasy food, sanitizer and a whiff of old cigarette smoke. None of these things are good ideas for Monkey.

Caleb had seen The Man in the Yellow Hat go bowling on Curious George recently and he began asking about it. First we went to the Wii bowling game, he likes it but it wasn’t what he wanted. Then I tried setting up a bowling activity at home using water bottles and a basketball, meh, no. Finally I told Eric we should just go for real. Neither of us had high expectations. Monkey had tried bowling a couple times before almost 4 years ago and it was exhausting (You can read about that trip here: I forgot to mention the bowling) but we aren’t quitters here at Chez Monkey!

After we filled our bellies, we set off with a Monkey who was at least a little excited about the trip because it was his idea. He ran into the bowling alley, shook hands with the guy behind the desk and waited while we got our shoes. He sat patiently while I fiddled with his shoes because they needed to be almost completely unlaced and then re-laced to get them on his chunky Monkey feet. He sat a bit less patiently as Eric struggled to get the computer thingy set up but he managed.

We set it up so C would go first. Mommy took the first go at showing Monkey how to bowl. After one pitched ball he did better but required a lot of coaching. By the time he finished his first two strings he was not nearly as excited as he had been. *sigh* This was looking like a repeat of the last time.

When his second turn came, Eric took a shot at teaching Monkey how to bowl. Still it took a lot of coaching and by the time those two strings were done I was pretty sure Monkey was too. Bugger.

He was starting to whine. He was getting hyperaroused and his behavior told me very clearly that this was not working. I wish he had the words to tell me that it was too loud or too stinky or too anything. I wish I knew what he needed help with. All I could do was offer deep pressure between turns.

When his third turn came, Monkey was very reluctant to even try. I looked at Eric and opened my mouth. I thought I was going to say, “Let’s just go.” but instead I said, “Fewer words.” Eric nodded. This is something we’ve learned from Tracey & Mouse, when your child is hyperaroused, talk less. Don’t bargain. You cannot bribe your way through hyperarousal. This has been one of the hardest lessons we’ve ever learned. Who doesn’t want to be able to say, “If you do this last thing I’ll give you a cookie!” and have it work??

After that first string of his third turn I thought of another lesson we’ve learned over the years, he needs to know when he will be done. As Eric helped him with the first ball, I grabbed two more. When Monkey turned around I showed him both. “This one and then this one. Then it’s Daddy’s turn.” 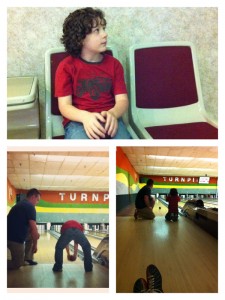 We did the last two strings just the same, we barely had to do any talking at all and Caleb stopped whining and just bowled!

When we finished the last string of the game Eric looked at me and signed “Go?” I really wanted to stay. Caleb was doing so well and we were having fun. “Ask him.”

“Go home,” was the response. It wasn’t the one I wanted, I wanted to stay, but he had just about hit his limit and I know through experience that we need to listen to him at those times. I’ve fought it before, remember “So, it’s not all sunshine, roses and unicorns flying out my butt“?

So, we told him what a great job he had done, we changed our shoes and we went home. Ending on a high note is just as important as enjoying the activity and I want him to walk away willing to try again some other day.

Like maybe next Sunday morning during the discounted hours 🙂

2 thoughts on “Learning to listen.”