One of the activities we did during the series was the “Yes, and” vs the “No, but” game. We all stood in a circle, we were told that we were to pretend that we worked for the richest company and the richest person in the world and that the CEO wanted to reward all of the employees so we were going to brainstorm a reward.

The first round we were required to say no to whatever the person next to us offered and come up with an alternative. We started off big with week of vacation and ended 20 people later with lots of excuses and a plaque.

For round two we were instructed to say yes to whatever the person next to us offered and add to it. We started small with that stupid plaque we ended round 1 with and ended up with company cars, a company island, our own condos on the island, a company jet, weeks and weeks of vacation, and lots of money. Round 2 was SO much more fun.

We were encouraged to take this “yes, and” attitude out into the world as we plan for our kids’ lives. One small change in thinking can have an astounding effect on everything. Seriously, e.v.e.r.y.t.h.i.n.g! Next week I’m going to play the “yes, and” game again…no one else is aware of it yet but I’m determined that it’s the only acceptable outcome.

We have had some issues over the last few months with Caleb not getting access to recreational programs he deserves to be part of. We did a lot of angry e-mailing, there were lots of long phone calls to lots of different people, wayyyy too much of my time and wayyyyy too many missed opportunities for Caleb before we came to a one time accommodation. One time. All that work…all that time…all that stress for ONE field trip. If you want the longer version you can read it here: The same story told twice. 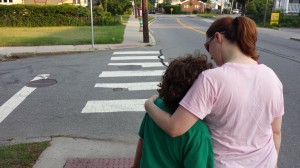 Next Tuesday there will be a meeting to discuss not only our issues but the issues other parents in the city have had in trying to do what we dared to do…ask that our kids be included like everyone else. Who would have thought that in 2014 that it would be a revolutionary idea, but there you have it. Wish me (and them) luck, please…it’s hard work changing the world! He’s so worth it though…