Sneaky is hard at work this evening, he’s preparing for a very exciting day tomorrow. 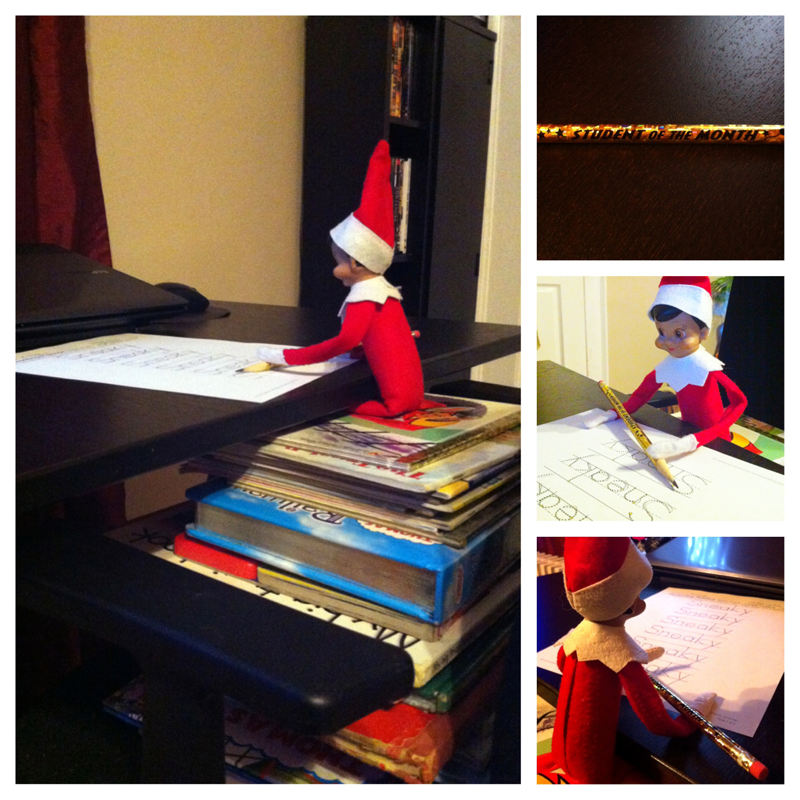 Caleb has been writing all sorts of stories at school about this Sneaky elf. I have been sending the teacher the photos every morning and they have been using them as story starters. They not only hold Caleb’s attention but they fascinate the other kids in the class. It’s become quite the social event, seeing what Sneaky has done now. His friends ask Caleb lots of questions about the pictures and Caleb answers them. How awesome is that??

Last week his teacher, who seems to love the adventures of Sneaky too, mentioned to Eric in passing that it would be fun to have Sneaky come to school. As soon as I heard, I sent her an e-mail to start making arrangements. SO! Tomorrow Sneaky will be secretly smuggled to school. His teacher and his aid have something planned there and have promised to take photos. Tomorrow also happens to be Caleb’s day to share so he will be sharing his pal Sneaky with his friends too.

I cannot wait to see what he gets up to!

I think poor Sneaky is getting a little worn out from all the trips back and forth between our house and the North Pole, it’s hard to believe he’s been doing this for almost 3 weeks already!

Last night he hung a hammock in the tree and took a little extra time for some rest. He seems to be catching up on what our neighbors have been up to this year…I’m sure there’s nothing to worry about there… 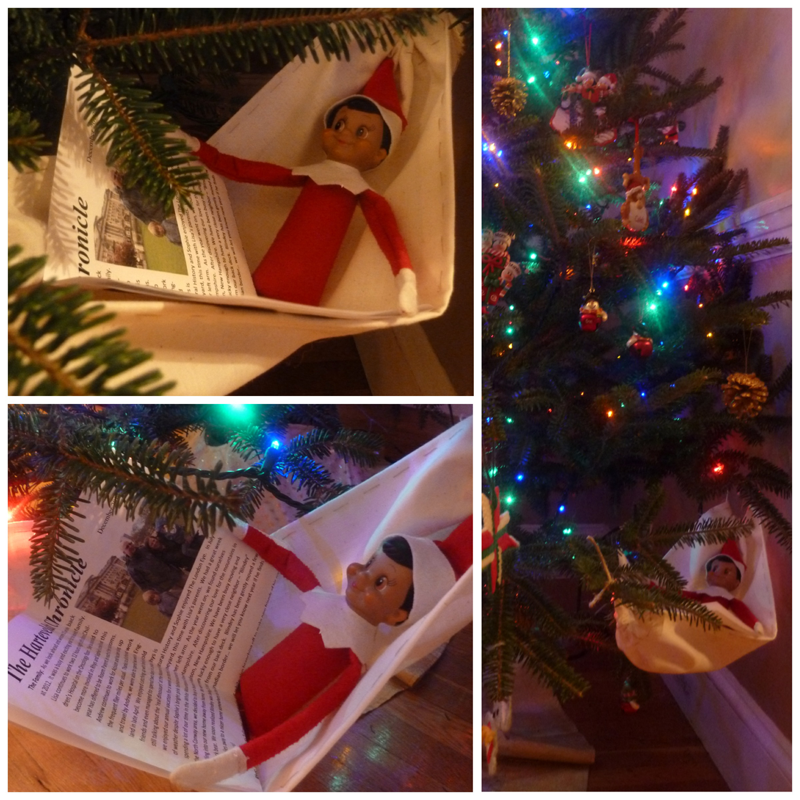 Caleb is not a fan of puzzles. He has done a very few willingly, mostly he leaves the room telling anyone within earshot, “No.” very firmly. So, fine, it’s not his thing. Do you think that ever stops me from trying to convince him it’s his thing? No? I guess you do know me!

So at bedtime, this is what was left for Caleb to find… 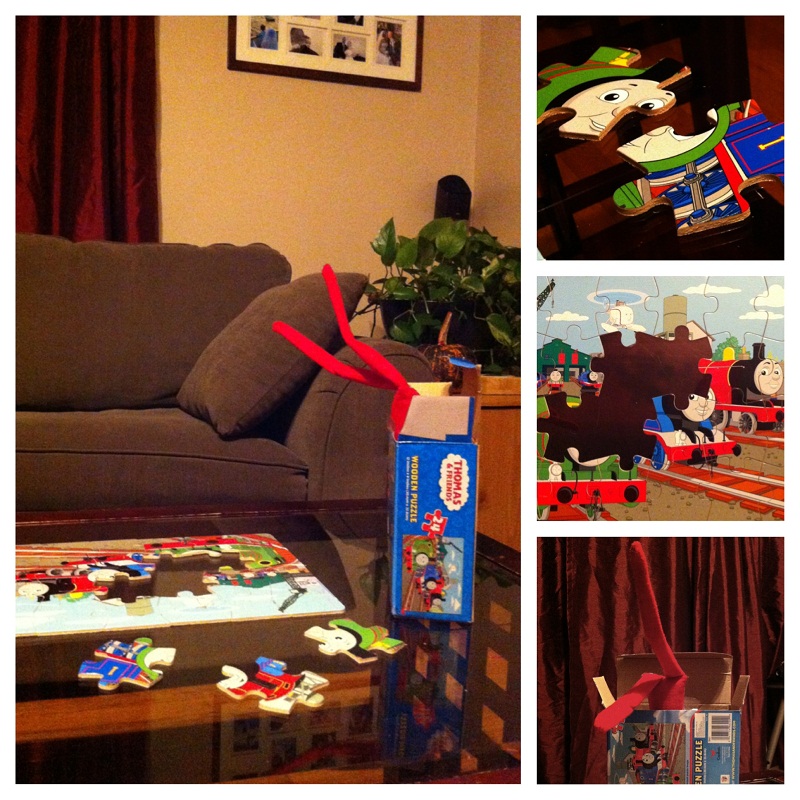 Yeah. My sneaky child woke up sometime last night and left this response. 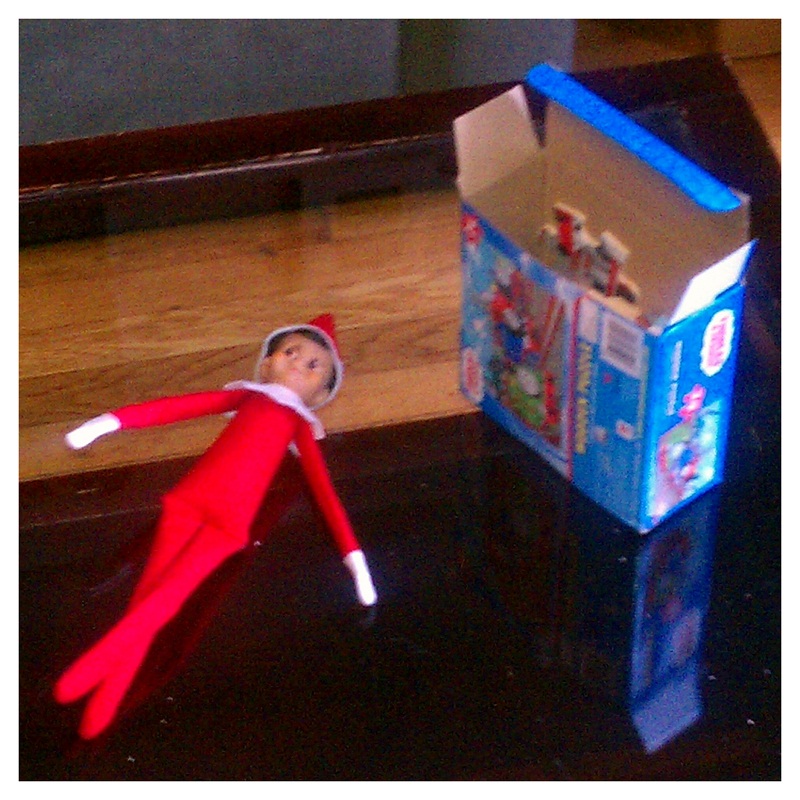 *sigh* We left Sneak yet another vitamin to help keep his strength up.

Anyone need a wooden Thomas puzzle that was used 3/4’s of one time?

Our elf Sneak appears to have either undergone a name change *or* Caleb’s language has caught up a bit and he’s finally able to say his name properly…either way…the elf is now called Sneaky. Very appropriate.

Sneaky caught a bit of Toy Story with Caleb last night just before bed, it appears to have inspired him. 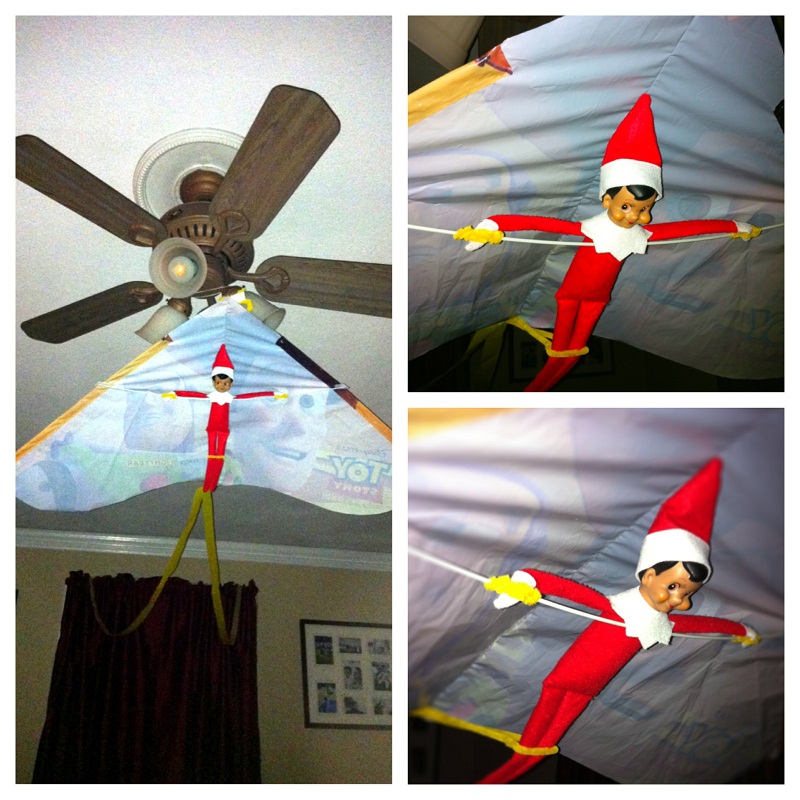 Sneak can be such a sweetie, last night he set the table for us! 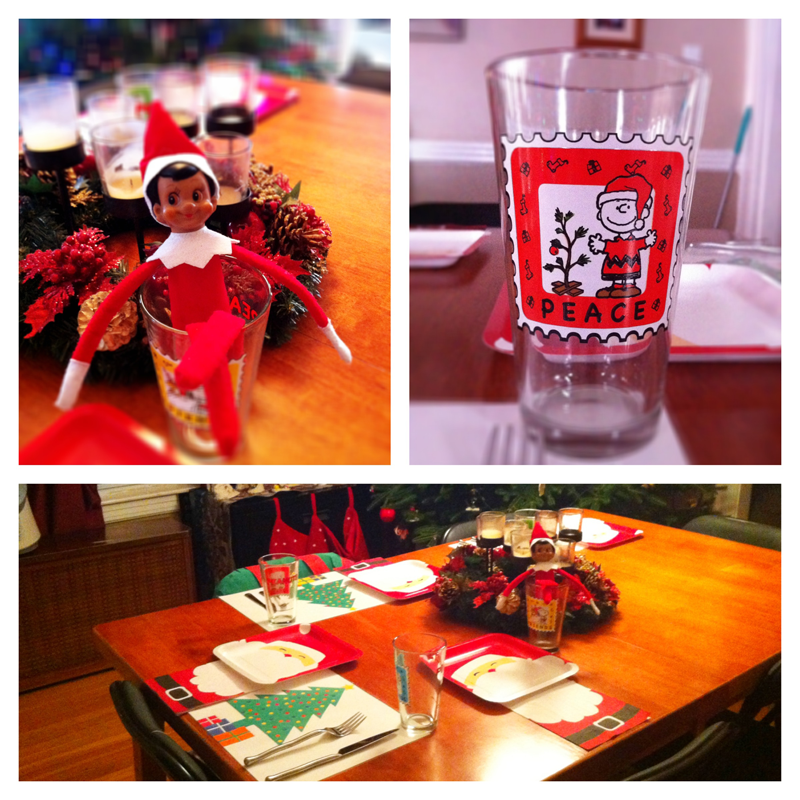 It inspired Eric to make us a big breakfast of french toast and sausages…I might whisper a request to Sneak today to set the table every night if that is the result!

**As an aside, last night as Eric watched me glue all those ornaments to the trees for our place mats he said, “I didn’t think you would take it to this extreme.” Umm, hello? It’s like he’d never met me before 😉

I think maybe Sneak likes us too…

Last night was FXMNO. I rolled on through the door, exhausted, at 11 PM after having enjoyed not one but TWO Tom Bradys (Stoli Raz, Blueberry something and…other stuff plus a slice of lime) that were, sadly, not delivered by the man himself. I had also just made such a pathetic attempt at parallel parking that the neighbor, who was in my spot so he does not earn any brownie points with me, took pity on me and came out to move his car back into his garage. I’m not entirely sure it was pity or absolute terror that I was going to hit his beautiful BMW SUV. By the way he came running out, jacket half on and half flapping behind him in the wind while he waved his arms frantically over his head, I couldn’t really tell. *ahem*

Eric was snoring away, the kid and puppies were snug in their beds (I caught Eric snuggling the puppy, ha!) and I had to move the elf. I was sort of hoping he would have magically moved by the time I got home but, alas, it was not to be. I was stumped, Sneak wasn’t talking to me…it’s possible he was asleep too. Finally I pulled up the list of ideas I created in SEPTEMBER (yes, slightly insane!) and dismissed them all. Then, in between snores, Eric suggested this…

Well, not that exactly. It’s a bit messier than he had in mind, I’m sure, BUT in my defense elves *are* notoriously messy *and* the cleaners are coming tomorrow. So, it’s just a bigger tip and I think they will be amused. Heck, I might even get a toilet paper flower as a reward!

Regardless, Caleb was delighted which really puts that mess in the proper perspective.